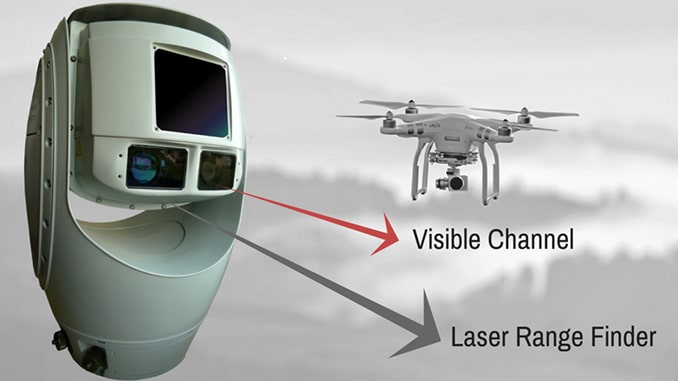 Terrorism by unmanned aircraft is a growing threat. Using drones to smuggle contraband into prisons is a current trend. While many countries are deploying UAVs in combat, the UAS technology is getting easier and easier to acquire by the general public and ill-intentioned groups. Most of security systems set up in critical infrastructures are not sufficient to guarantee an appropriate level of protection. Over the past several months, more and more drones have been flying over Florida’s prisons, particularly as a means of smuggling.

To protect prisons, borders and critical infrastructures from smuggling and terrorism, Industries upgraded their most powerful 360° Thermal imaging sensors -X and -S, integrating a Visible Channel and a Laser Rangefinder to the thermal cameras. The new V-LRF option aims to facilitate the tracking and the identification of a detected threat, thanks to the full HD visible cameras’ optical zoom (x30). The exact distance of the threat is provided by the Laser Rangefinder in real time, an option particularly adapted to the detection, tracking and recognition of the smallest targets, like UAVs.

An innovation it is, as all other systems on the market must use separate sensors to get similar functions: one sensor for detection, a radar for instance, and another sensor for identification, such as a PanTiltZoom camera. Xavier Elbaz, Sales Manager at Electro Optical Industries explains: “With separate systems, it is hardly possible to ensure a real 360° coverage for detection and identification because of blind sectors created by the mechanical supports. Moreover, separate sensors must be integrated and calibrated to properly operate together. SPYNEL & its V-LRF option ensure no blind sector for a real 360° coverage in all surveillance phases: detection & identification.”

In addition, most of the time, UAVs’ small size and low electromagnetic signature go unregistered by traditional detection measures. With SPYNEL’s thermal imaging technology, it is impossible for a drone to go unnoticed: any object, hot or cold will be detected by the 360° thermal sensor, day and night.

SPYNEL V-LRF and its automatic detection & tracking software CYCLOPE are easy to deploy and to use, and the system is easily interfaceable for multi-sensor protection of critical infrastructure like prisons. Data is smoothly merged with other sensors’ data like radars, AIS, fence vibration sensors, etc., and displayed on the same interface, whereas separate sensors must be integrated and calibrated to operate properly together.