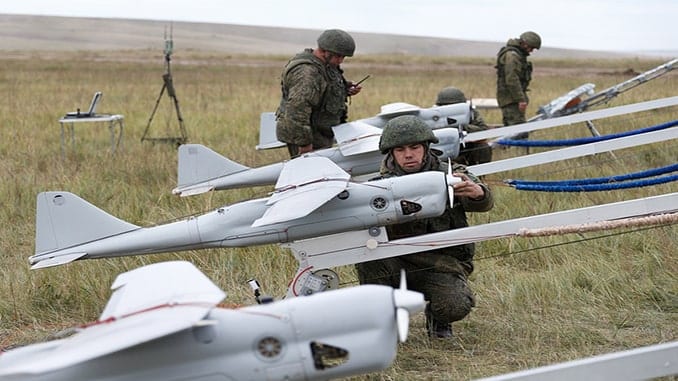 Russia’s Defense Ministry announced Nov. 6 that the nation had extended the range on its drone-carried jammers to 100 km, or over 60 miles. Drones as a platform for, and not just the target of, electronic warfare means that the sight of a flying robot overhead could signal incoming strikes as well as a sudden inability to call for help.

“Russia has been using a UAV-mounted cellphone jammer for a number of years now,” said Samuel Bendett, a research analyst at the Center for Naval Analyses. The drones operate in a two- or three-vehicle pod with a ground station, collectively grouped as a “Leer-3” system.

“When these UAVs fly in teams, one acts as a signal-and-comms relay while another acts as a jammer,” Bendett said. “These Leer-3 systems have been around for about two years at this point.”

What is changed is the range of the jammer. The Orlan-10 drones already have a range of 75 miles, which means that, with the latest update on the jammer, the drone pod can interfere with signals up to 135 miles away from where the drone was launched. TASS reports that the 60-mile range is a 3.5 times increase in distance from the initial range.

In addition, Bendett said there’s a chance this capability, or an earlier version of it, has already been witnessed in conflict.

“Ukrainian forces claim to spot Leer-3 systems in eastern Ukraine, while there is potential evidence that Leer-3 was used in Syria as well,” Bendett said. “Russian forces are constantly training with Leer-3 UAVs as they practice adversary signal and cell comms suppression, identification and eventual destruction of the enemy force. In fact, this kind of training is part of the official [tactics, techniques and procedures] in electronic warfare and other forces across the Russian military.”

Advancements in electronic warfare are one of the key components guiding the development of autonomous systems for the military. For now, drones are conducting electronic warfare against cellular communications, but it’s not hard to imagine the same doctrines applied with new technology. In that scenario, it easy to picture other vehicles transforming into jamming machines on future battlefields … and maybe even present ones.