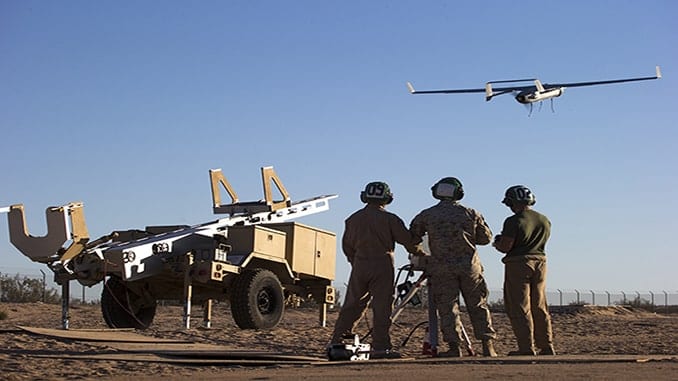 The signals are flying fast and furiously. Everybody’s on the same frequency; overhead drones transmitting surveillance data, operators on the ground and commanders in the field. And because everyone is on a congested frequency, what should be near-instantaneous transmissions slow as the seconds tick by.

On the battlefield, those seconds can mean the difference between success and failure. The answer could be X-Net, a new radio communications system that autonomously and instantly selects the optimal radio frequency to keep communications flowing.

The radio, which is designed for use with missiles, stand-off precision guided munitions and small unmanned autonomous systems, connects host platforms to the tactical network. It made its debut earlier this year at a demonstration hosted by the Air Force Research Lab and the U.S. Navy.

“Over the past few years, it’s been a huge accomplishment to make sure everyone operates from the same network,” said Bob King, a program manager at Raytheon’s Integrated Communication Systems. “However, now that we’re all on the same page, operators need to share all that radio frequency space and can transmit without disruption. We call that ‘playing nice’.”

During the demonstration, dubbed ESCAPE, Raytheon swapped out two existing radios on a Navy RQ-21A Blackjack for the company’s X-Net system. Its mission was to allow the host platform to freely operate in a dense signal environment and conduct its intelligence, surveillance and reconnaissance mission.

X-Net performed the flight control operations and video transmission job of the legacy radios, and also allowed the Blackjack to flip its own switch to the best radio frequency for operations. In fact, it continuously hopped radio signals to avoid busy frequencies.

“We were jumping frequencies often because of the different emitters that were out there,” said David Duran, a Raytheon engineer and a member of the demonstration team. “Not once did we get a call or hear from anybody that any of the communications were being stepped on.”

As more platforms connect to communications networks, it will be vital to keep frequency space optimized for military operations, where information must quickly be shared.

“This was a valuable opportunity to demonstrate new mission capabilities – such as mesh network radios with dynamic spectrum access like the X-Net Radio – into the RQ-21A, which will lead to significant improvements in battlefield communications,” said Steve Brown, mission systems lead for RQ-21A Blackjack.

Now that it’s proven it can work in congested environments, X-Net could be an option for use in contested environments. It could potentially thwart an enemy’s attempts to jam crucial radio frequencies.

“We’ve already seen examples of adversaries trying to disrupt or completely destroy our information advantage on the battlefield,” said Barbara Borgonovi, vice president of Raytheon Integrated Communication Systems. “X-Net is a part of a solution to make sure those attacks never work.”