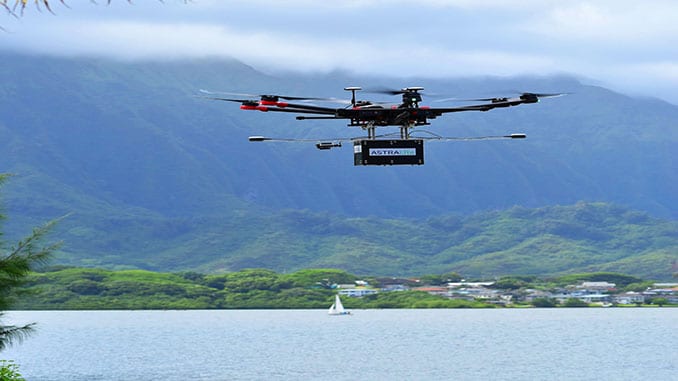 ASTRALiTe, Inc., successfully demonstrated its 2-in-1 Topo-Bathy LiDAR flying on a DJI Matrice 600 Pro UAV during three separate missions over the course of a month.

“This is a significant achievement in miniaturization! Bathymetry from a medium-sized UAV platform is now just as easy to perform as topographic LiDAR surveys,” said Gerald Thompson, VP of Operations for ASTRALiTe.

“It’s a breakthrough to have a bathymetric scanning LiDAR system capable of working on the widely available DJI Matrice UAV. It opens up whole new business areas.”

The LiDAR runs on its own self-contained battery, saving the drone batteries and enabling more air time. Even with medium-to-high winds, the M600 was able to handle the 5 kg LiDAR payload, and was able to collect centimeter-level bathymetric LiDAR data in each of 13 flights.

At a nearby Reservoir in Colorado, ASTRALiTe integrated its 2-in-1 Topo-Bathy LiDAR System onto the DJI Matrice 600 Pro, one of the most widely used drones in the surveying market. Piloted by the drone professionals at Juniper Unmanned, the M600 was able to carry the 5 kg (11 lb.) payload with ease, while maintaining stability during two 15 minute flights.

A second demonstration was conducted at high elevation in conjunction with the US Geological Survey (USGS) in Kremmling, CO at the confluence of the Colorado and Blue rivers. Four flights were conducted with flight times ranging between 10 – 12 min. River transects were made to document volume flow of the two rivers including depth profiles, vegetation mapping, and underwater object detection.

A third set of demonstrations was conducted at the Applied Research Lab (ARL) MANTAS II 2018 Tech Demo at the University of Hawaii’s Institute of Marine Biology (HIMB) on Coconut Island. Over three days the LiDAR was put to the test on the windward side of the island in conditions that included salt spray and significant surf. The expert ARL staff piloted the Matrice 600 Pro masterfully in these conditions collecting near-shore bathymetry, dune, inlet and lagoon profiles, and mapping underwater coral reef structures at centimeter-level resolution. A total of seven flights were conducted, the longest being 17 min.