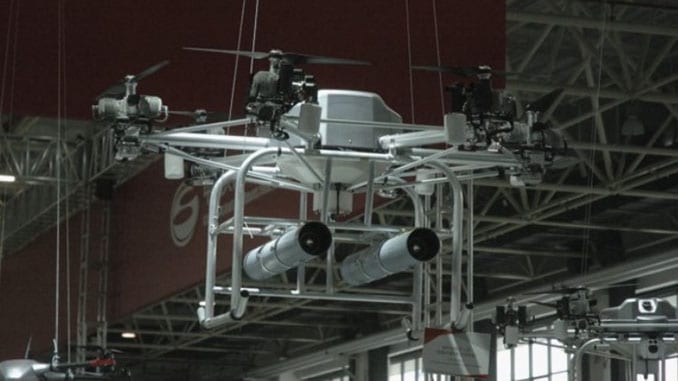 The China North Industries Corporation (Norinco) presented a concept for the use of strike-capable, multi-rotor unmanned aerial vehicles (UAVs) flying in a swarm at the 6-11 November Airshow China 2018 defence exhibition in Zhuhai.

The concept, which can be adapted to fit various tactical scenarios, involves the use of several MR40-series (equipped with four rotors) and MR150-series (six rotors) UAVs fitted with search and targeting radars and reconnaissance subsystems and armed with an array of weapons, including guided missiles and fragmentation bombs, as well as parachute-retarded and rocket-propelled munitions.

“The multi-rotor UAVs have also been fitted with a multi-channel datalink and can operate in a network-centric combat environment,” .

As part of the Norinco concept, the UAV swarm can be used to engage an array of targets, including soft-skin and a number of armored vehicles, artillery systems, radars, military and storage facilities, communication hubs, aircraft shelters, and logistics support lines.

According to the company official, the UAV swarm, which has an operating range of 30 km and an endurance of an hour, can also be armed with air-to-air missiles to engage aerial targets at short ranges.