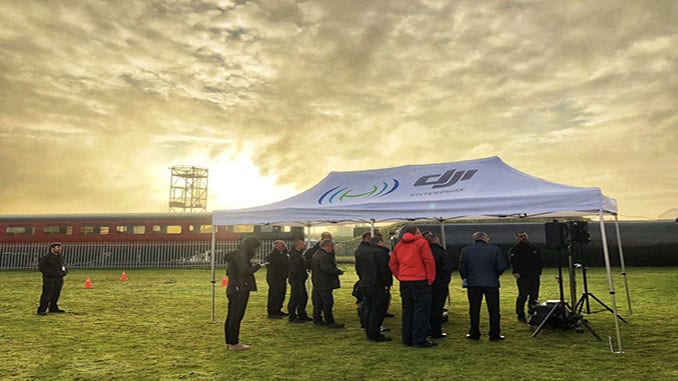 A derailed train lies on its side. Casualties are trapped among the wreckage, desperate for help. It’s a critical situation, with every minute crucial to survival.

As part of the rescue operation, the emergency services fly a drone to the crash site, allowing officers to analyse the carnage from a safe distance and to provide crucial information to the stricken passengers.

Loud and clear, a message is relayed to the casualties via a speaker attached to the quadcopter. ‘This is the emergency services. Please remain calm. Help will be with you shortly.’ These reassuring words are played over and over, before vital aid arrives.

Thankfully, this was just an exercise. An imaginary situation based on a real-life scenario to showcase the prowess and advantages of using the recently-released DJI Mavic 2 Enterprise.

The demonstration was staged during Heliguy’s Emergency Services Roadshow in Lincoln, which was held in partnership with DJI on Tuesday and doubled up as the official UK launch event for the Mavic 2 Enterprise.

The roadshow, at Waddington Training Site, in Lincoln, was attended by 50 emergency-services personnel – including representatives from almost half of the UK’s police forces, as well as a decent number of fire and rescue, mountain rescue and RNLI crews – who learned more about this impressive new drone, which has been designed with public safety, inspection, search and rescue, fire response and law enforcement in mind.

Features of the DJI Mavic 2 Enterprise

Among its key features are the three accessories – the strong dual spotlight, which enhances vision in low-light areas and can pinpoint the exact location of a missing person; the beacon, featuring a bright flashing strobe visible from three miles away to enhance visibility during night-time flights; and the aforementioned speaker, which is capable of a projection of 100 decibels and can be used for real-time voice transmission, as well as storing voice recordings for future use.

Another scenario played out during the Heliguy event further endorsed the capabilities of the Mavic 2 Enterprise and the effectiveness of its accessories.

Using the spotlight – which can achieve a maximum brightness of 2,400 lumens – and the dynamic 2x optical, 3x digital zoom camera, the drone was flown out to inspect a suspicious package inside an abandoned vehicle (see picture below). The light, coupled with the zoom, gave absolute clarity, allowing the pilot to conduct this close-range mission without getting into harm’s way, analysing the suspect parcel from a far.

The live demonstrations followed a presentation by DJI’s Enterprise Product Manager Eduardo Rodriguez, who gave a detailed breakdown on the specifications and features of the Mavic 2 Enterprise.

Other perks of this impressive newbie include the 31 minutes of flight time, its 72kph maximum speed and the self-heating battery which works in temperatures as low as 14°F (-10°C); a crucial factor as accidents and incidents can happen at any time of the year.

The Mavic 2 Enterprise is small, light, compact and foldable, meaning that it can be carried with ease and is ready to go within minutes, while its omnidirectional obstacle sensing system keeps the drone at a safe distance away from obstacles, such as cliffs, vegetation and buildings.

A big plus for emergency-service personnel, especially the police, is the password-protect system which is needed to take off or to access the 24 GB on-board storage, ensuring that the data stays safe, even if the drone falls into the wrong hands.

What was clear from the roadshow was that the Mavic 2 Enterprise (pictured below, with speaker accessory attached) is a mighty and sophisticated bit of kit, and attendees liked what they saw. For instance, Mike Smith, of Lochaber Mountain Rescue Team, said that he was absolutely impressed by the aircraft. 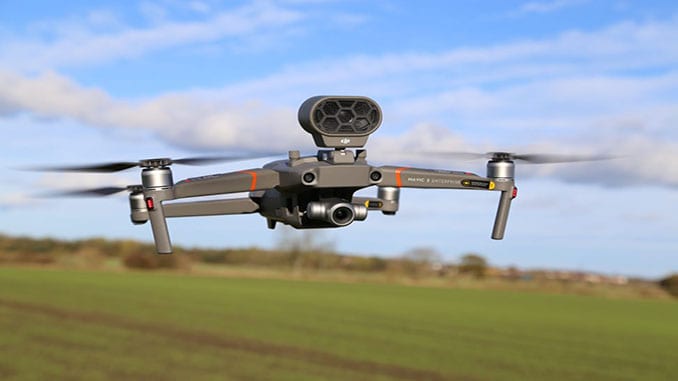 The benefits of the Mavic 2 Enterprise and drone technology in general were further endorsed by keynote speakers from three police forces.

Speaking during the roadshow, the Force representatives gave fascinating insights about how they are using UAVs for multiple purposes, including searching for missing people, gathering evidence, increasing situational awareness and training new recruits. And in some cases, drones have been the difference between life and death.

Having already used the Mavic 2 Enterprise, PC Tom Shainberg, lead drone operator for Devon and Cornwall Police, and pictured below, told the audience that the aircraft was a massive step forward and had massive capabilities.

He praised the spotlight and the speaker accessories in particular and added: “The password requirement gives a good layer of protection for us, while the battery, which can operate down to -10°C, is another positive.”

Among his case studies, he explained how the drone had helped uncover numerous offences at a traveller site, which was initially under investigation for housing victims of human-trafficking. While surveying the area, the drone revealed an unexpected haul of £200,000-worth of stolen electrical cabling, a cannabis factory and a carefully-concealed stash of weapons.

Mark also told a powerful story about how the drone fitted with a thermal camera had found a missing 13-year-old girl, who was in a ditch and on the brink of death, suffering severe hypothermia. Thankfully, she was located and saved. Mark said: “I believe that if we didn’t have the drone, she would have been found dead in the morning.”

Lincolnshire Police is also using drones and Special Sergeant Kevin Taylor detailed various examples during the roadshow, including how the Force’s drone pilots landed their first successful prosecution earlier this year. During this case, the UAV helped to discover a ‘professional cannabis growing operation’ which could produce more than £50,000 worth of the drug. As a result, Mark Lovell, 54, of Anderby Road, Chapel St Leonards, was jailed for three years for producing the Class B drug.

DJI Committed to the Enterprise Sector

The case studies were proof that drones are being used for good, and during the event, DJI set out its commitment to developing technology which will improve operations and effectiveness within the enterprise sector. The Mavic 2 Enterprise is just one example of this. The Phantom 4 RTK – DJI’s most compact and accurate low-altitude mapping solution.

As well as the Mavic 2 Enterprise, DJI announced other developments and new releases during the event, including the in-depth DJI Flight Simulator, which helps to train pilots in a range of real world scenarios.

At the end of the roadshow, Tautvydas Juskauskas, DJI’s Public Business Development Manager for Europe, the Middle East and Africa, said that he was delighted with how the event had gone.

He said: “We got a really good crowd from the emergency services and the public-safety sector.

“We see that, more and more, emergency services in the UK commit to large-scale drone operations. What we find very exciting is that these drone operations are getting recognised by key decision-makers and stakeholders. This is thanks to the people who are the pioneers who have used drones for law enforcement, fire services and search and rescue operations and shown how helpful they can be.

“This was the main idea of the Emergency Services Roadshow – bringing these people, who work with the drones, together so that they can share their experiences.”

He also praised Heliguy for holding the event, which he described as being slick and well managed.

He said: “It was a true pleasure to work on this project with Heliguy. It was a great team effort and I really appreciate Heliguy’s professionalism.

“From day one, when we introduced this concept to the Heliguy team, I saw their continuous commitment to DJI and their clients, their very constructive approach in execution, and of course, the smooth event’s implementation.

“It was a great event with lots of good discussions and great presentations from the emergency services. So big thanks to everyone.”

Reflecting on the roadshow, Ben Shirley, part of the Heliguy training team who helped to organise the event, said: “The day was well received and really beneficial. It was great to see all of the emergency services share knowledge and experiences, providing valuable insight into how organisations differ in terms of operations.

“Thank you to all the staff from Heliguy, DJI, the guest speakers and all of the attendees for showing their support.”