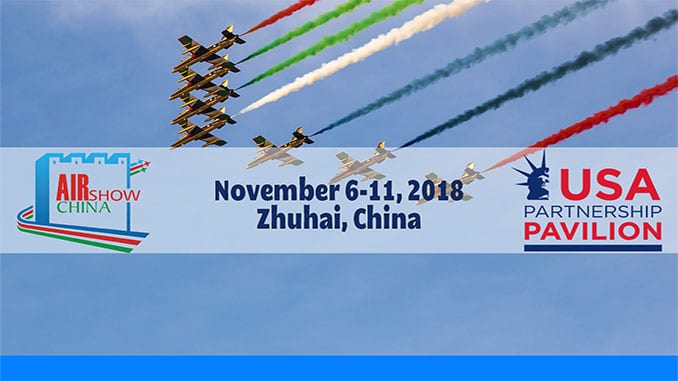 American aerospace manufacturers and suppliers exhibiting at Airshow China 2018 this week are approaching the show with a collective spirit of partnership that looks beyond current trade and economic tensions between Washington and Beijing to future cooperation.

The biennial business event, the most comprehensive of its type in China, is expected to host nearly 800 exhibitors and more than 130,000 trade visitors from some 50 countries November 6-11 in Zhuhai.

More than 40 U.S. companies — among the largest international contingents at the show — will present a wide range of innovative solutions for commercial and general aviation manufacturing, assembly, operations and maintenance. A majority will exhibit in the new USA Partnership Pavilion organized by Kallman Worldwide, Inc., Airshow China’s official U.S. representative, in coordination with government agencies including the departments of Commerce, State and Transportation.

Kallman has organized U.S. exhibitors around the world since 1963 and at Airshow China since the 1996 edition, but this is the first time U.S. companies at the event will exhibit under the “USA Partnership Pavilion” umbrella. Company President and CEO Tom Kallman said the new brand was inspired by the 2016 edition of the show, and has since been successfully established at trade events around the world.

“Maybe it was because of COMAC’s emerging prominence — 70 percent of suppliers on board the debut C919 are reported to be American — or just the obvious scope and scale of the Chinese aerospace market, but at Airshow China 2016, the message was clear: Now more than ever, success in international trade depends on partnership and teamwork,” he said.

To punctuate that message, Kallman will be joined by Apollo 15 Command Module Pilot, Col. Al Worden, USAF-Ret., who will make his first visit to China in conjunction with the show as a goodwill

“Well into our third decade of organizing exhibitors at this event, the presentation of the USA Partnership Pavilion at Airshow China 2018, featuring Al Worden, sharpens our focus on helping advance America’s national interests and economic security by building stronger long-term relationships with our Chinese customers,” Kallman said. “Many of our exhibitors — from publicly traded original equipment manufacturers [OEMs] to small- and medium-sized enterprises [SMEs] with fewer than 500 employees — already have significant business partnerships and operations in China. In the years to come, many more will.”

Located prominently in Hall 5 at the Zhuhai Airport show site, the USA Partnership Pavilion is America’s headquarters on-site: an efficient location for buyers to meet more U.S. suppliers, a high-profile showcase for American exhibitors looking to maximize their exposure and impact at the event, and a forum for all to share ideas and insights.

The Pavilion features 36 exhibitors representing 13 states. Fifteen are new to the show, and all are looking to generate new business and create jobs by growing exports, expanding in-region and/or recruiting overseas partners to establish or participate in home-based operations.

In recognition of America’s participation and Kallman Worldwide’s decades of support for Airshow China, show organizers will honor the USA Partnership Pavilion as the 2018 “Outstanding National Pavilion.”

“National pavilions are a patriotic expression of industry pride, presented in the spirit of global partnership,” said Kallman. “America’s presence at Airshow China 2018, amplified by this recognition of the USA Partnership Pavilion, is a strong indication of how important China is to U.S. aviation and aerospace suppliers, and that buyers and influencers here are also looking to the U.S. for innovative solutions and partners.”

In addition to space on site, USA Partnership Pavilion exhibitors are featured in Kallman’s online Airshow China 2018Visitor Zone at www.kallman.com/airshow-china-2018. The Visitor Zone features a centerpiece searchable Pavilion directory, plus interactive tools — including Exhibitor News Spotlights and images — to connect interested industry professionals and media around the world to the USA Partnership Pavilion, even if they can’t attend Airshow China2018 in person.

No Replies to "U.S. Aerospace Industry Brings Spirit of Partnership to Airshow China 2018"