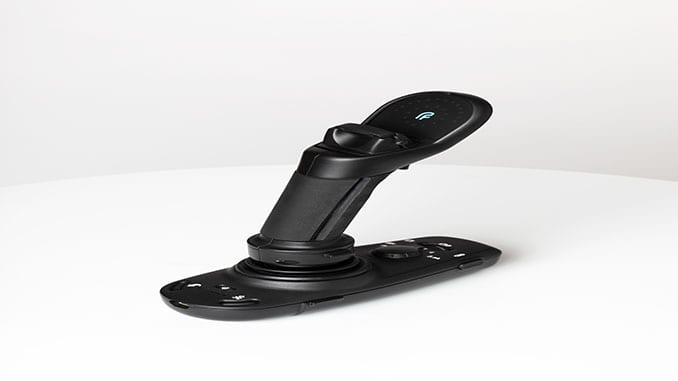 Drone pilots, from commercial experts to novices, can now increase their flight precision and improve their image/video quality with a first-of-its-kind single-handed controller from Fluidity Technologies. The FT Aviator drone controller was conceptualized and designed by former NASA astronaut, pilot and physician Scott Parazynski, who has applied spaceflight and robotics control expertise to address and improve upon the many challenges of drone, or unmanned aerial vehicle (UAV), flying.

Unlike traditional controllers, which most closely resemble a gaming controller with a complex two-thumbed control design, the FT Aviator intuitively unlocks the human potential to fly a drone with a more natural and exacting way of piloting. Its ergonomic design incorporates the drone-relevant four degrees of freedom through space (x, y, z and yaw), eliminating the awkward interface and steeper learning curve of existing dual-handed drone control, as well as providing tactile and visual feedback on what’s really happening with an aircraft.

The controller also brings the most important camera functions to the controller, versus having them buried deep in an app. The controller has dedicated buttons to control the rate of tilt on-the-fly as well as other commonly accessed camera functions such a shutter speed, exposure compensation and even zoom to create smoother video sequences. This revolutionary controller stands to speed up drone adoption and quality of image/video capture for hobbyists and professionals, including cinematographers, videographers, photographers, realtors and inspectors.

“Working with everything from the Space Shuttle robotic arm to surgical robotics in labs I found controllers clunky, inaccurate and in no way related to the dynamics of movement through space,” said Parazynski, founder and CEO, Fluidity Technologies. “Our patented technology changes that – for the first time providing highly-intuitive, precision movement to UAVs. It stands to lower the barrier to entry to drone flying, tremendously enhancing precision while also making drone flight a lot more fun.”

The FT Aviator is the first product launched by Fluidity Technologies. Its patented and patent-pending technologies will soon be applied to virtual and augmented reality, computer and console gaming, surgical and medical robotics and more.

About Fluidity Technologies
Fluidity Technologies is a technology innovation company focused on redefining movement through 3-dimensional space. Founded by former NASA astronaut, pilot and physician, Scott Parazynski, the company’s mission is to simplify and improve motion in an increasingly complex world. In Fall 2018, Fluidity Technologies launched the FT Aviator, its first patented single-handed drone controller designed to dramatically increase the precision of drone flight, while tremendously simplifying it.