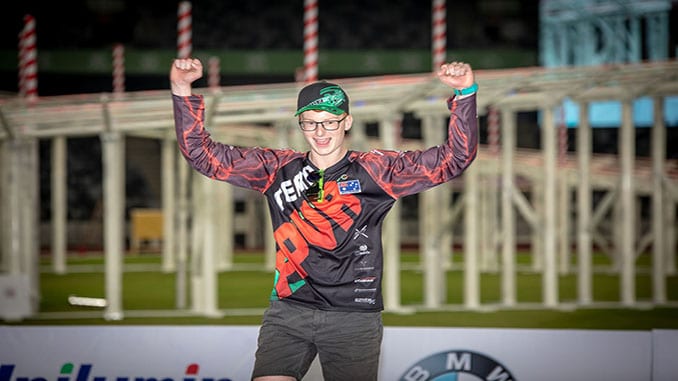 Rudi Browning from Australia has been crowned FAI World Drone Racing Champion after a stunning four days of competition in Shenzhen, China.

The 15-year-old pilot beat 127 other drone racers from 34 countries to win the title and the prestigious FAI gold medal in a final race that was watched by tens of thousands of drone fans around the world.

“It feels absolutely amazing,” he said afterward. “I dreamed of this, and it is incredible that it has come true. I couldn’t be happier.”

He added: “I am a very competitive person and I aim high. The goal was to win everything I could. A lot of luck comes into it, as well as skill, so everything came together and I am super happy.”

The final of the FAI Drone Racing World Championships came at the end of a four day competition, that was held in the Shenzhen Universiade Centre Stadium in Shenzhen, the Chinese tech-city known as the heart of the drone economy.

Browning beat three other drone pilots in a fast-paced and adrenaline-fuelled final. He won ahead of Bastian Hackl from Austria, who came in second and won silver, and Karlie Gross from Latvia who won bronze.

Browning added: “I’m still shaking actually. I have had a lot of ups and downs in races, like everyone, and this is definitely one massive high. I can’t thank everyone enough.”

Browning went home with a prestigious FAI gold medal and a $24,000 US winner’s cheque.

He was not the only one to go home with a gold medal. Wanraya Wannapong, the 11-year-old drone-master from Thailand won the Women’s FAI World Drone Racing Championship. One of 13 women in the competition, she said she was very happy with her win. “I loved this track a lot. I liked flying it at night, it was a lot of fun.”

Wannapong is supported in her drone racing by her father. The father-and-daughter pair practice in their own training field in Thailand. “I fly every day, and all day when I am not at school.” Oscar Nilsson, 17, from Sweden won the Juniors title. One of 44 Juniors in the competition, he was overjoyed at his win. “It feels really good. I was aiming for an overall win, but Junior is also really good. I want to thank my team for the support, and the Norwegian team. We came to China aiming to cooperate and it really worked out.

In the Teams, Australia took home gold medals, with Sweden in silver and Korea in bronze. Australian team manager David Crepaldi said: “I’m very proud of the boys. The team pulled together and everyone played their part and pulled together.”

The competition, which was streamed live online and carried on television across China’s Tencent network, was the first FAI World Drone Racing Championship and was designed to showcase the very best drone racing in the world.

Pilots competed as individuals and teams, with up to five people, including one woman and one junior, in each national team.

Drone racing is a relatively new sport and has become popular very quickly. In races, four pilots fly against each other around a dedicated drone race track. The first one to successfully cross the finish line wins that race.

The track in China was one of the best ever seen in drone racing competition. Built in the shape of a Chinese knot, it was 650m long and featured three levels. Pilots had to fly up, down and over and through obstacles and gates, testing their skills as pilots.

At night the course was lit up with 7,000m of LED lights, creating a visual experience that both pilots and viewers loved.

Susanne Schodel, Secretary General of the FAI, the World Air Sports Federation, said: “It was a pleasure to see so many competitors from around the world, lots of young people, competing over four days for the title of FAI World Champion.

“We have enjoyed great hospitality from Shenzhen Municipality and Kaiser Group, and ASFC, it was a perfect cooperation. It is the best drone racing competition I have ever seen.”