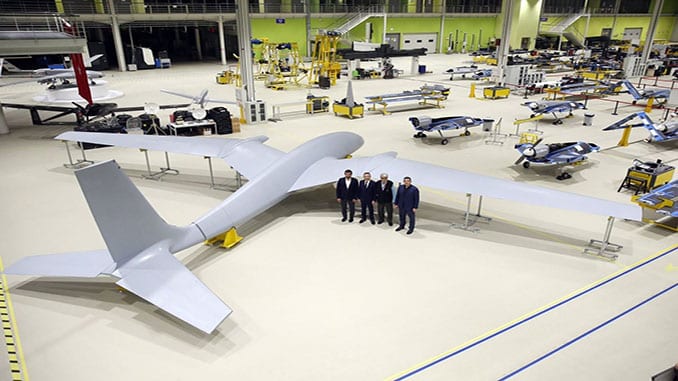 A privately owned Turkish drone specialist has installed the wings on its unmanned fighter jet currently in development.

Bayraktar shared photos of the Akıncı on social media after the assembly of the aircraft’s wings. “It [the program] is progressing as scheduled,” Bayraktar said. Turkey’s vice president, Fuat Oktay, visited the Baykar Makina production unit to inspect the Akıncı.

Bayraktar believes the platform’s development foreshadows a more advanced version of itself down the road.

Baykar is Turkey’s leading privately owned drone specialist. It has supplied 58 unarmed and armed drones to the Turkish military that are mainly deployed in areas (southeastern Turkey, northern Syria and northern Iraq) where the country is fighting Kurdish militants. Fifteen Baykar drones are simultaneously on duty for counterterror missions. The company wants to raise that number to 50.

Baykar’s TB-2, a drone that comes in both armed and unarmed versions, is mainly deployed in Turkey’s southeast to combat Kurdish militants. The armed version uses the MAM-L and MAM-C, two miniature smart munitions developed and produced by state-controlled missile-maker Roketsan.

The TB-2 can fly at a maximum altitude of 24,000 feet for up to 30 hours. Its communications range is 150 kilometers. The aircraft can carry up to 55 kilograms of payload.

“We (the world) are decades away from fully unmanned fighter aircraft. But for countries like Turkey that fight asymmetrical warfare, the gear built between full unmanned fighters and today’s armed drones will be crucial,” a senior defense procurement official said.

Increasing asymmetrical threats on both sides of Turkey’s Syrian and Iraqi borders have urged the country’s military and procurement and industry officials to boost existing drone programs and launch new ones.

The Akıncı is the latest version of a family of drones Turkey thinks could best fight insurgency at home and abroad. In June, Turkish officials said a contract had been signed for the development and production of the 4.5-ton Akıncı. The first deliveries are scheduled for 2020.

The Akıncı features an altitude of 40,000 feet and a payload capacity of 1,350 kilograms, which it can carry for up to 24 hours. The aircraft is powered by two turboprop engines, each generating 550 horsepower. The engine is under development by Tusas Engine Industries, or TEI, a state-controlled engine maker of the PD170.

TEI has been working on the PD170 since December 2012 when it signed a development contract with SSM (now SSB), the country’s procurement agency,.

The Akıncı can be armed with a wide range of air-to-ground munitions including MAM-L, MAM-C, CIRIT, Mk81 and Mk82 general-purpose bombs, smart munitions (such as HGK, KGK and LGK) with various guidance kits, and SOM air-launched cruise missiles.