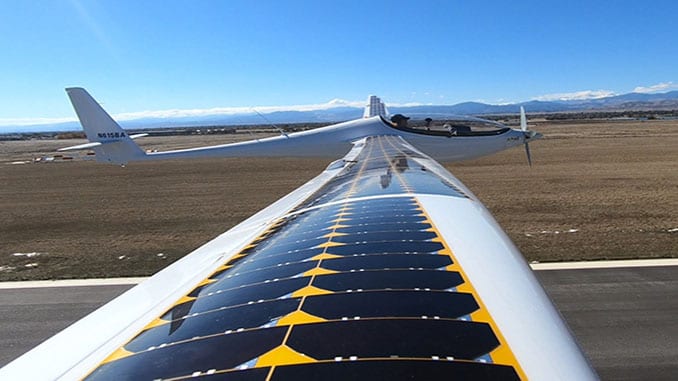 The prototype made six short flights, with further data collected on take-off and landing performance, climb rate, aero-efficiency and motor and battery operations. Airborne motor cruise efficiency and solar cell energy collection data will be the focus of the next series of flight tests.

George E. Bye, CEO and Founder of Bye Aerospace, said he continues to be encouraged by the performance test data. “We met or exceeded each parameter in the test flight plans,” he said. “The StratoAirNet is going to be a remarkable, game-changing aircraft.”

The Solesa aircraft system will be piloted, performing similar patrol and survey missions for shorter flight durations. It also provides an R&D test platform for new customer payloads. StratoAirNet is intended to be a longer-endurance UAV and will follow required steps to qualify this additional capability.

About Bye Aerospace, Inc.
Bye Aerospace, an innovator of sophisticated aerospace technology, is developing the “Sun Flyer” family of all-electric aircraft in addition to a family of advanced, medium and high-altitude, long-endurance solar-electric aircraft called “StratoAirNet” and “Solesa.” The company was named the 2018 Small Business of the Year in the “small business” category by the Denver Business Journal.

For more information, go to www.ByeAerospace.com.