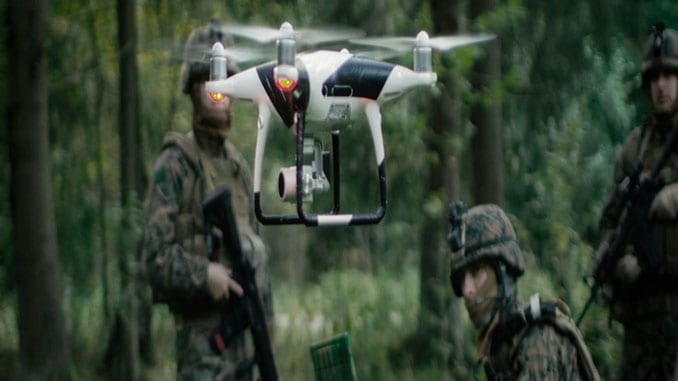 MyDefence co-hosted the event Electric Storm to demonstrate the capability of the latest MyDefence Counter UAS products for dismounted soldiers. The event featured a live demonstration of the detection and jamming capabilities of the WINGMAN 103 drone detector and the PITBULL Counter UAS jammer.

“Drone swarms are a concern in the military domain and it has been a priority for us to provide an effective solution to combat multiple drones for both dismounted soldiers and in fixed installations. With the WINGMAN and PITBULL setup, we have demonstrated just that, and the system will be able to defeat countless drones simultaneously,” says Christian Steinø, CEO of MyDefence.

The PITBULL Counter UAS jammer is the ideal solution for dismounted soldiers operating in hostile environments, where enemy forces utilize commercially available drones for reconnaissance and as weapon delivery systems.

The device is wearable and weighs only 775 grams. Used in conjunction with the WINGMAN drone detector, the PITBULL can automatically jam drone signals, when a drone is detected. This reduces the cognitive load of the operator, allowing the soldier to focus on the mission, without worrying about enemy drones.

MyDefence is founded by military officers with insight into military operations and advanced radio technology. We are specialized in developing sensors and effectors for military customers to mitigate the threat of malicious drones.

MyDefence protects those who protect us. Our combat proven products provide end users with state-of-the-art technology for enhanced protection and situational awareness on the battlefield. By listening to our end-users and combining their learnings with our technology, we are producing innovative and versatile Counter UAS solutions for any type of mission.