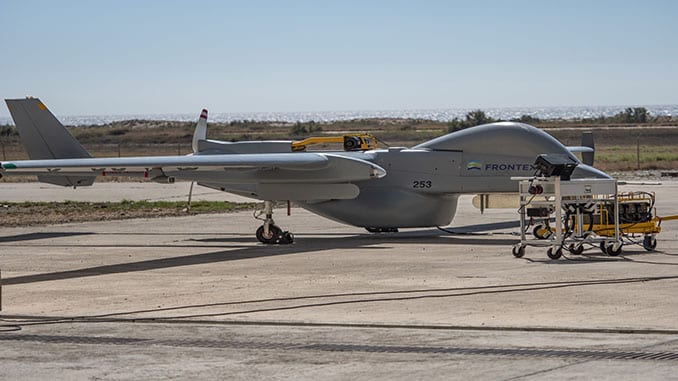 Flying for FRONTEX, the European Border and Coast Guard Agency, the maritime Heron performed a series
of flights equipped with an electro-optical payload for day and night vision, a marine radar made by IAI and
an automatic identification receiver. Each mission lasted 14 hours on average. The surveillance platform
Heron 1 used a direct link when flying within Line of Sight (LOS), switching seamlessly to a satellite link
when flying Beyond Line of Sight (BLOS) to transmit real-time information to multiple users in real time.

IAI and Airbus were selected by FRONTEX in a contract that includes operating the RPAS in daily security
and coastal guard missions, maintenance and more. IAI and Airbus will provide the service for pre-planned
assignments as well as for ad-hoc calls. The current contract covers 600 flight hours and may be extended
into a longer-term agreement.

The Maritime Heron RPAS serves a range of customers worldwide and is a part of the well-known “Heron”
family which has accumulated over 300,000 flight hours, day/night missions, under all weather conditions.
The Heron can fly 24 hours in full operational configuration. It carries versatile dedicated payloads to
provide a clear, real-time intelligence picture to the marine vessels’ commanders and teams. The only RPAS
directly controlled by a ship’s command system since 2010, the maritime Heron is in service with the Israel
Navy as its key patrolling tool, successfully performing reconnaissance and security assignments for many
years.

Avi Bleser, Vice President of Marketing of IAI&#39;s MALAT Division said: “We welcome the contract with
Frontex and the cooperation with Airbus. Flying in European airspace is a breakthrough for IAI. The Heron
successfully completed all its missions and exceeded expectations, proving that it can fly civilian routes
without any problems. We believe this is a significant step forward for IAI into other commercial markets
for the Heron RPAS.”

Thomas Wehrhahn, CEO of Airbus DS Airborne Solutions (ADAS) said: “This long-endurance maritime
surveillance contract marks a new milestone in our ability to extend our successful unmanned operational
services from military customers to civilian stakeholders such as FRONTEX and eventually other EU
agencies. It also further demonstrates our capacity in selecting the right tools and collaborations for our
teams to provide the best possible service to our European customers”.

The Logistics of Drones and the Future of Transport