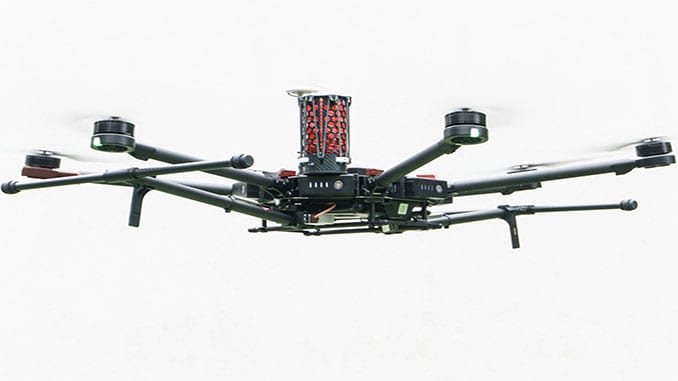 The parachute system DRS-10 is designed for multicopters with a total weight of 5 to 20kg and is therefore well
suited for adaption to the DJI M 600. This multicopter model is employed in the field of professional aerial
photography and for industrial applications. “The M600 is the workhorse of the drone fleet for many service
providers. Many different cameras and gimbals are compatible and fully integrable, which makes the M600
very versatile. For this reason it is all the more important, that the aircraft as well as the payload are protected
from crashes”, explained Andreas Ploier, CEO and co-founder of Drone Rescue Systems GmbH.

Besides the carbon cage, in which the parachute is stored, the rescue systems of Drone Rescue consist of
intelligent electronics, which monitor the flight status independent of the flight controller. A sophisticated
algorithm merges the sensor data, through which an automatic crash detection is realized. Therefore, in an
emergency the pilot no longer needs to react and press an eject button, as this is often not possible anyway,
for example with a failure of the radio link. Furthermore, the algorithm reacts faster than the pilot, i.e. the
system ejects the parachute itself. All flight data and movements are recorded in a Black Box. In an emergency
these can be read out and made available to insurance companies or authorities.

“Our goal is to ensure, that even in an emergency Beyond Visual Line of Sight (BVLOS) the drone can be safely
intercepted. With our parachute system that is always possible, due to the electronics that are completely
separate and independent of the flight controller. In addition, our system has the advantage, that it manages
completely without explosive, pyrotechnical solutions. Consequently, we have a system that is considerably
lighter, and functions even in a worst case scenario”, elaborated Ploier.

The parachute safety solution works autonomously and independent from the drone and ejects the parachute
in a fraction of a second, enabling a safe commercial and private drone usage even over crowded places.
The main goals of the Drone Rescue products are to reduce the risk of harming people on the ground and to
bring down the expensive equipment safely when it comes to a malfunction of drones up in the air.

DroneDeploy Teams Up with REIN's DroneInsurance.com