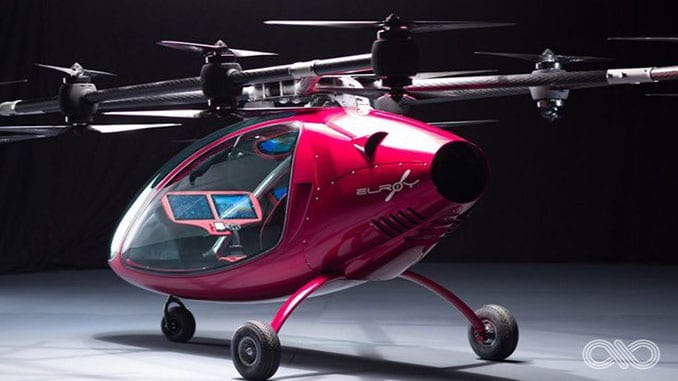 Astro CEO Bruce Bent says, “To see Elroy fly so smoothly and efficiently validates all of our efforts and continues to move us forward as a leader in the eVTOL space”.

The testing culminated on Wednesday September 19, with a 4 minute and 30 second flight, reaching heights of over 60 feet and speeds of over 50 km/h. The avionics and flight control systems were put to task with a multitude of manoeuvres and the vehicle remained exceptionally stable, even under the affects of a couple of unexpected wind gusts. Due to a predefined wind speed limitation on the SFOC, Elroy was grounded for the remainder of the week.

“Although we would have liked to continue with more testing, we were able to gather plenty of valuable system data that assists us moving forward. We had a really good week.” Phil Croft of Astro stated.

Elroy is Astro’s 2 passenger, eVTOL (Electric Take Off and Landing) short haul aerial vehicle that has the ability to travel up to 70km/hr for 25 minutes completely emission free, is ideal for urban commutes, and turns a 2 hour trip into 20 minutes.

About Astro Aerospace
Astro Aerospace is the developer of the world’s most advanced, autonomous, eVTOL (Electric Vertical Takeoff and Landing) aerial vehicles.

Our mission is to make self-flying unmanned and manned vehicles available to anyone, at anytime, from anywhere, and to turn this new and exciting aircraft into a mainstream mode of transportation.