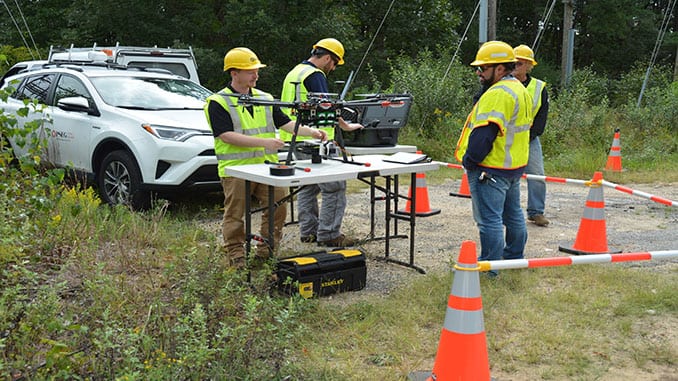 In order to further improve and advance Long Island’s electric system, PSEG Long Island and ULC Robotics, a leading technology company based in Hauppauge, are deploying unmanned aerial vehicles (UAV) – or drones – to conduct the utility’s inspections of power lines and other important equipment.

The two companies began working together in 2016 under a large-scale pilot program. This year, PSEG Long Island is expanding the role drones play in its operations.

“This week, we are using this innovative technology to asses a substation and right-of-way, as well as segments of our transmission and distribution system,” says John O’ Connell, vice president of transmission and distribution operations at PSEG Long Island. “Compared to using helicopters or ground-based observation, UAVs give us better data on the electric system, which directly improves system reliability and employee safety.”

In addition to routine and challenging inspections of difficult-to-access infrastructure, PSEG Long Island is preparing to integrate the use of drones into its storm and emergency response efforts, which require accurate surveys of post-storm equipment damage for crews to be properly assigned.

O’Connell continued, “Storms appear to be happening more frequently in our region and getting more severe. This enhanced aerial data is going to help us further harden our system before major storms and assist with emergency response after storms. With more than 9,000 miles of overhead wires, this will allow us to better utilize our resources and more rapidly restore customers’ power.”

The drones being used for the inspections are developed and deployed by licensed UAV pilots and engineers at ULC Robotics. The UAV being used is 4.5 feet wide and weighs 25 pounds. ULC’s pilots use a commercial-grade command and control system to operate the drones.

“UAV systems are a real game changer for utilities such as PSEG Long Island,” says Tom Barracca, Manager of Business Development at ULC Robotics. “Whether we’re helping to identify an outage waiting to happen or expediting post-storm electric service restoration, our pilots and engineers are helping PSEG Long Island keep the lights on.”