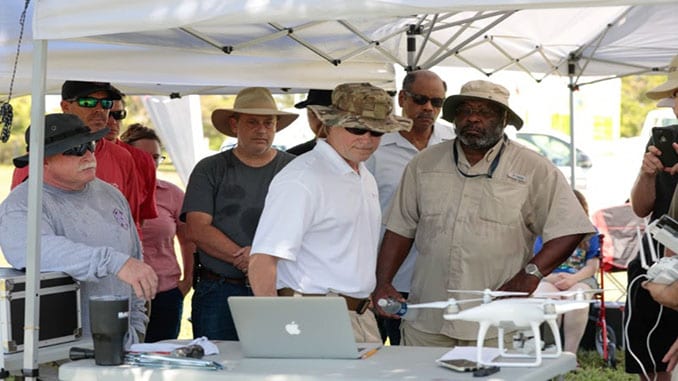 Last year’s hurricane season was a benchmark year for the role of drones in emergency management.  Harvey, Irma, and Maria all had varying characteristics that served well to showcase the benefits that unmanned aircraft systems (UAS) can provide for response and recovery operations.  However, the well-documented –- and publicized – success of those efforts is now likely to create a new problem; well-intentioned remote pilots who self-deploy to disaster scenes hoping to help save the day.

Most of us have been raised on that iconic vision of the Lone Ranger galloping into trouble on his white horse “Silver.”  Superman, Wonder Woman — whichever icon you choose to use — the storyline is always the same; a single person with special capabilities and a keen sense of compassion coming in to rescue the helpless.  Unfortunately, disasters are not fiction and even the Lone Ranger can become a problem for emergency managers when he needs a place to water his horse in the midst of a response effort.

While many good Samaritan remote pilots believe they can make a positive difference in a disaster, the fact is that most drone operators do not possess the fundamental training, skills, and experience to be truly effective.  UAS disaster operations are a learned skill that must be developed and exercised to become effective during a what is likely to become an extremely chaotic sequence of events. The FAA Part 107 remote pilot certification is only the starting point for those drone operators who want to become proficient at disaster response.

The weather immediately after a hurricane is most often deceptively perfect.  Sunny days with clear skies can mislead the uninitiated into a false sense of security — such as what happened after Hurricane Irma moved through Florida in September 2017.  What the inexperienced eye did not see was the lack of power, closed gasoline stations, no available hotel rooms, and the sparse supplies such as food and water available at those few stores that were actually open after the storm.  Mobile communications were hit or miss, meaning that if you required emergency support a cell phone may or may be of any assistance to you.

Atempting to enter restricted areas like the Florida Keys or parts of Collier county became essentially impossible for those without official credentials from a legitimate public safety or government agency, or from a critical infrastructure provider such as a power or telecommunications company working to restore services.  Unless of course you were willing to risk the ire of the law enforcement and National Guard personnel holding assault rifles at the roadblock.

That Good Samaritan who just travelled several hours to help save the residents of the Florida Keys now found themselves parked on the side of US 1 with no gasoline, no hotel room, and probably no ability to make a telephone call.  The only place they could go was an emergency shelter to hopefully find some food and a space on the floor to get some sleep.  In essence, they just became a part of the problem, rather than a part of the solution.

One of the first lessons of emergency management is to never self-deploy.  At both Airborne Response and the Airborne International Response Team (AIRT) — our 501(c)3 non-profit organization, we train our remote pilots on this basic premise.  Our remote pilots learn about scope of major disaster response operations.

Like every first responder across America, Airborne Response and AIRT teams complete essential FEMA courses that teach them about the Incident Command System (ICS), the National Incident Management Systems (NIMS), and local damage assessment tactics.  They learn how to prep their gear before a storm, pack provisions that will allow them to self-sustain in the field for up to 72 hours.  They learn how to effectively integrate into ICS and NIMS so that when they are told to report to “Logs” they find the logistics section instead of looking for the nearest tree.

Then they wait.  They wait for the call to come with a deployment order.  Sometime it happens, sometimes it does not. Every storm and every disaster have its own nuances that distinguish it apart from the others.  With hurricanes; size, strength, speed, and location are all important variables that will dramatically determine the scope of the response effort and whether extra UAS teams are needed.

The State of North Carolina appears to be ahead of the curve in their effort to mount a coordinated drone response.  The North Carolina Department of Public Safety had previously created the North Carolina Unmanned Aerial System (UAS) Disaster Response Database (https://www.ncdps.gov/uas)  to provide local emergency managers and first responders with a list of qualified remote pilots who are willing to provide services to their community.  This is an example of a well-conceived effort by an official state resource to provide a coordinated UAS response for incidents like Hurricane Florence.

A similar effort is underway in Florida, as well as several other states.

Instead of rushing toward the Carolinas, savvy and responsible remote pilots will take this moment to pause and plan.  There is most certainly a role for remote pilots to play in both disaster response and recovery operations.  They key is to join an organization that will help teach and train you to respond effectively so you truly can make a difference.

Two of those organizations are the Airborne International Response Team (AIRT: http://airt.ngo) and the Center for Robotic-Assisted Search and Rescue (CRASAR: http://crasar.org). Each organization has a proven track record of training volunteer remote pilots, as well as working with government agencies and first responders to integrate UAS flight teams into coordinated disaster response efforts.

As Hurricane Florence barrels up toward the Carolina coastline, starry-eyed drone pilots with visions of grandeur need to give themselves a reality check.  Are you preparing to be part of the problem or part of the solution?

The entire unmanned systems industry is hoping that you make the correct choice.

Xsens Raises The Standard For IMU Performance With MTi 1-series