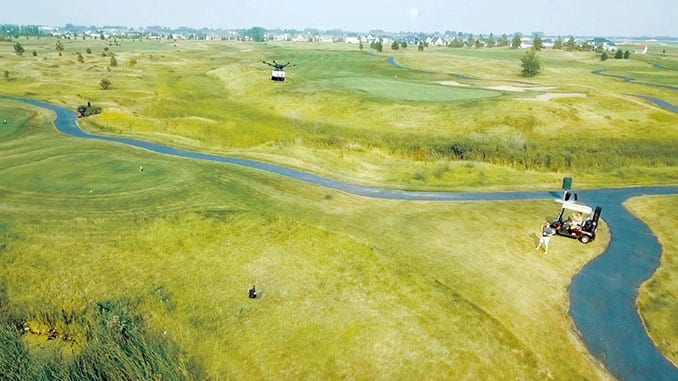 Drone logistics company Flytrex, which last month opened new delivery routes across the capital of Iceland, has announced a new partnership that officially brings drone delivery to the U.S. But there’s a catch. You have to be playing the back nine at an exclusive golf course to take advantage.

Announced today, Flytrex is partnering with drone company EASE Drones on its on-green sandwich and beverage service, which will debut at King’s Walk Golf Course in North Dakota.

Golfers use an app to place their order. Payload is manually added to the drones by cafe staff. During delivery, the drones lower an independent cargo bay via a long tether, reducing risk of injury to humans by allowing the UAV (and its six spinning propellers) to stay airborne.

Flytrex, an Israeli B2B company that helps e-commerce retailers launch same-day drone delivery, has been pushing drone delivery internationally via its delivery partnerships, including the recent urban delivery project in Iceland, for which it partnered with e-commerce company Aha.is.

But it’s been difficult for drone companies to gain traction in the U.S. The FAA’s strict rules governing commercial drones include a key provision in what’s known as Exemption 333 that mandating they remain 500 feet from non-participating structures and people. As a result, urban drone delivery has been unable to take off here.

But golf courses, which are expansive and access-controlled, make a perfect venue for delivery drones under the FAA’s rules. Golfers at King’s Walk will have to sign a waiver giving their consent. Seeing as there are more than 15,000 golf courses in the U.S., it’s a potentially lucrative market.

For Flytrex and plenty of other drone companies chomping at the bit to open up drone delivery services in the U.S., the public exposure to the U.S. market may be equally lucrative. As more people become comfortable with the idea, and as drone delivery picks up in Europe, Australia, and Asia, popular opinion may influence future FAA rule making.

“The sky’s the limit when it comes to drone capabilities,” says Yariv Bash, CEO of Flytrex. “From delivering snacks and beverages to golfers, to assisting in search and rescue operations, to performing key inspections, drones are being incorporated into all aspects of life. This is the first of many projects we have planned in the U.S., including an FAA approved pilot in North Carolina which will take off later this year.”
Prev post