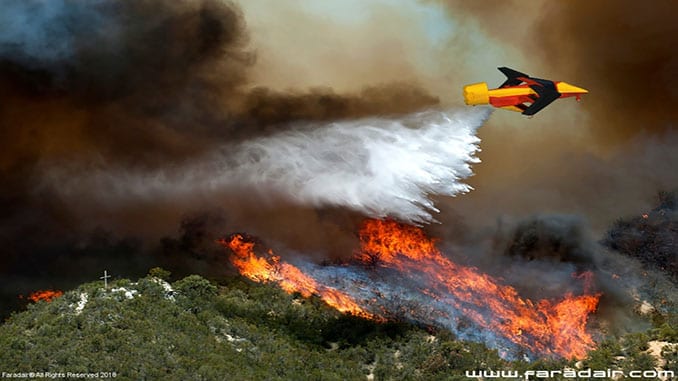 Considerable interest has already been shown in the BEHA M1 military variant following the popular International Airshow, with discussions now ongoing as to exact specification capability and design optimisation adjustment to fulfil those roles.

With unrivaled payload lifting profile and capability of the BEHA M1 revealed in July, it was a natural progression to be able to demonstrate additional roles and capabilities of the aircraft. With increased global temperatures and growing numbers of forest fires, the requirement for airborne firefighting capability is increasing. However, the operating cost for many of these aircraft often results in fires getting out of control when they could have been contained sooner with immediate fire suppression.

The ability to fly a fleet of autonomous drone BEHA M1-AT’s to a fire location, providing continuous low level delivery with greater payload capability than helicopters for less operational cost and zero pilot risk, is an attractive proposition. Powered by a 2000 horsepower turboprop engine (yet to be finalized), the BEHA M1-AT offers nations and firefighting services, an aircraft that can fly autonomous fire retardant delivery, without risk to a manned crew in repeat cycles over an autonomous track.

To date, former WW2 era bombers and converted civilian jets have been used to deliver large-scale firefighting capability, but that scale increases costs and pilot risk. The 11-meter wingspan BEHA M1-AT with a 10-tonne payload capability offers the operator an opportunity to acquire a fleet of aircraft, for a fraction of the acquisition and operational costs of helicopters, flying in a rotation to combat the smaller fires and to prevent them becoming larger fires.

The aircraft’s unique ‘triple box-wing’ configuration allows extremely short take-off and landing capability whilst also allowing the aircraft to lift large payloads with hybrid flight capability if required. BEHA can operate from any surface, in confined spaces with the protection of the propeller in the rear duct, lessening the risk of Foreign Object Damage (FOD) during payload delivery runs. The all carbon composite airframe is lightweight and extremely strong, allowing for larger payloads to be carried, making it perfect for anti-fire operations.

“We have always said that our new BEHA aircraft platform is focused more on multi-role functionality than specific focus in one class of flight (Urban Air Mobility) and this firefighting drone configuration really highlights that capability. Obviously the ability to carry retardant also opens the opportunity for refuelling in the military environment, possibly negating the need for resupply fuel tracks or even low cost air to air refuelling option for the F35B from carriers without ‘cats n traps’. It is a genuinely exciting aircraft and we are now tweaking the design of the airframe to ensure the most volume can be achieved from the payload capability” Managing Director of Faradair Neil Cloughley said.

He continues – “With our management teams past experience of the UAV sector, the ability to offer a pure UAV variant of BEHA has always been something we were keen to pursue and with the growing number of fires, possibly related to global warming, we saw a great opportunity to ensure that every nation can afford airborne firefighting capability. We would be delighted to open dialogue with firefighting departments and commercial airtanker providers throughout the world to see how the BEHA M1-AT can fit within their portfolio of operations”.

The BEHA is currently undergoing design optimization at Swansea University and scale model flights have been conducted from a satellite office in Sweden. Talks are ongoing with UK Government investment groups and new partners to ensure this exciting UK aerospace start-up continues to grow.