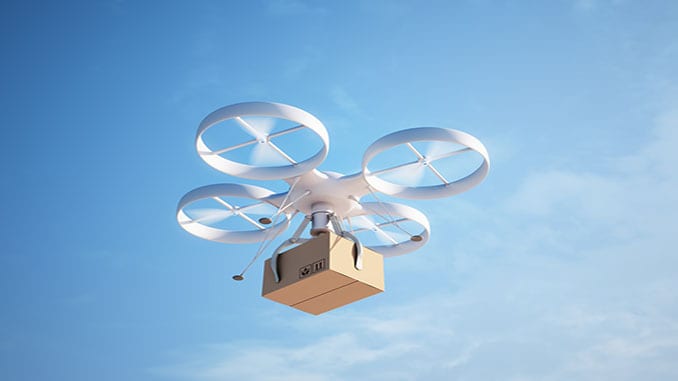 Blockchain continues to find innovative use not only in the disruptive technologies stack, but also across the traditional industry sectors. A patent application published by U.S. Patent and Trademark Office (USPTO) on August 30 indicates that the world’s largest retail giant Walmart Inc. (WMT) may be developing a system through which capable autonomous electronic devices (like drones) may exchange real-time information with each other over wireless signals, and even exchange physical objects, like a delivery package, with each other after suitable mutual authentication. (See also, Why Is Walmart Filing Blockchain Patents?)

Titled “Systems, Devices, and Methods for In-Field Authenticating of Autonomous Robots,” the system can be useful to build a blockchain-based authenticated network of delivery drones (or robots), where one drone carries a particular pack to a designated drone junction, where another drone is located to carry forward the pack to its ultimate or next transit point. The two drones will use blockchain authenticated signals and keys to verify each other automatically, following which the first drone will rightfully push the package to the second one. The ecosystem-based on blockchain data entries will ensure that all such trust verifications, transfers and ultimate delivery to end destination happens automatically. The other artifacts of this specialized automatic drone delivery network will include sensors, RFID codes, QR codes and ultrasound.

As and when put in the real-world use, this system can offer multiple benefits. It will enable direct delivery from factory to customer within minimal time, as current operations that involve a combination of air, rail and road travel lead to a considerable time delay.

It will also enable long-distance delivery. While drones are currently being used at select locations for delivery, they have a limited coverage owing to their limited battery power. Using the above system will enable the development of a transit hub-based coordinated network, similar to that of a train or air freight where goods are delivered over long distance using multiple vehicles.

The blockchain-based automated authentication and exchange mechanism will aid in minimizing time delays, and has the potential to reshape the logistics industry altogether. It will also enable real-time tracking of the packages by the designated stakeholders.

As the patent describes the system in a concept-only theme, the real implementation and use of other blockchain specific artifacts, like smart contracts, is not yet confirmed. However, there are endless possibilities of customization within the blockchain technology, and various implementations can be achieved which can streamline the whole drone-based logistics activity with high operational efficiency.

Based on earlier initiatives and patent applications filed by the Bentonville, Arkansas-based retail behemoth, it has been actively working on various blockchain solutions for its business. Right from attempts to ensure food safety to delivery fleets to smart appliance management, it has been active in the blockchain space. (For more, see Walmart and IBM Will Use Blockchain to Ensure Food Safety.)

3DR and Yuneec Announce Joint Venture Based on Dronecode Platform