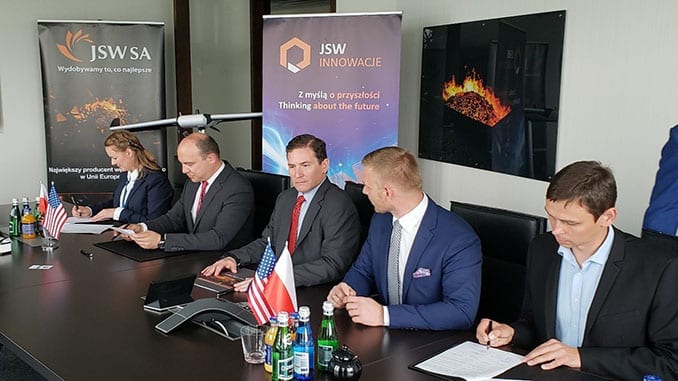 The Unmanned Autonomous Systems (UAS) commercial drone industry in Poland is currently booming, similar to the one being seen in the United States.  One of the leading entities in this commercial autonomous systems market is JSW SA, a company that makes the core ingredient for steel with a $2.5 billion market capitalization.

Under the Poland Nevada International Trade Agreement formed in October 2017 by Governor Brian Sandoval and the Nevada Governor’s Office of Economic Development (GOED), NIAS was called upon to create a formal Memorandum of Understanding (MOU) relationship with the 90-year veteran Institute of Aviation, Warsaw (ILOT).

During its follow-up visit to Poland the week of August 20, 2018, NIAS was given keys to the JSW operational mining sites and observed the internal coke production and observed how JSW is innovating in the field of autonomous systems with senior JSW Innovation staff.  The culmination of this visit was a collaboration Letter of Intent signing ceremony signaling a major step in bringing NIAS into the Polish and global Autonomous Systems Industry as a leading partner.

“This dynamic collaboration between JSW SA and NIAS is an example of Poland and Nevada’s continued dedication to be leaders in the Unmanned Aerial Systems Industry,” said Paul Anderson, Executive Director of the Nevada Governor’s Office of Economic Development.

“For Polish mining to be competitive, it should invest in the most innovative technologies,” said Daniel Ozon, President of the JSW SA Management Board. “JSW is open to cooperation with global companies that offer modern technological solutions.  That is why I am very pleased that we have begun a cooperation with NIAS, which is a global leader in this field.”

“We are very impressed with JSW Innovation and their technological advancements this past year,” said Dr. Chris Walach, Executive/Senior Director of NIAS.  “We agreed to do what no other global location is doing, which is to create the first Center of Excellence (COE) focused on mining safety, public safety, and technology that could have the duel-purpose to conduct mining operations on the Moon, Mars, or on a nearby asteroid.  This means we are creating the first joint Autonomous Systems Test Center in both Nevada and Poland that will advance earth-based and intergalactic autonomous vehicle mining technology.  This is a first for the State of Nevada and we hope to attract NASA, Nevada Mining, and commercial space companies to partner with us.”

This was the first high-level signing between the President of the JSW SA Management Board and an external U.S. entity (NIAS) in its 25-year history. The cooperation intent letter focuses on autonomous systems, exchange of experience in the field of concepts, projects, technological solutions, direct cooperation to implement unmanned aerial systems into the National Airspace System and advancing autonomous mining technology.

About the Nevada Governor’s Office of Economic Development:  Created during the 2011 session of the Nevada Legislature, the Governor’s Office of Economic Development is the result of a collaborative effort between the Nevada Legislature and Governor Brian Sandoval to restructure economic development in the state. GOED’s role is to promote a robust, diversified and prosperous economy in Nevada, to stimulate business expansion and retention, encourage entrepreneurial enterprise, attract new businesses and facilitate community development. Learn more at www.diversifynevada.com

About the Nevada Institute for Autonomous Systems (NIAS): The Nevada Institute for Autonomous Systems (NIAS) and FAA-designated Nevada Unmanned Aviation Test Site leads the growth of the Nevada Unmanned Aviation Systems (UAS) Industry through business teaming relationships, collaborating with primary research institutions on UAS research and development, and enhancing the Nevada UAS Industry knowledge base to attract new and permanent business and create jobs in the State of Nevada.   Learn more at www.nias-uas.com

About JSW SA: The JSW Group is the largest producer of high-quality hard (type 35) coking coal and a major producer of coke in the European Union. JSW’s coking coal is used predominantly in the production of coke which, in addition to iron ore, is an essential component of feedstock for the production of steel. In its coking plants, the JSW Group processes approximately 50% of the coking coal it produces, thus enabling the Group to offer a final product that is more processed and of a greater value. The Company is also a producer of steam coal, sold mainly to power plants and CHP plants. Learn more at: https://www.jsw.pl/en/