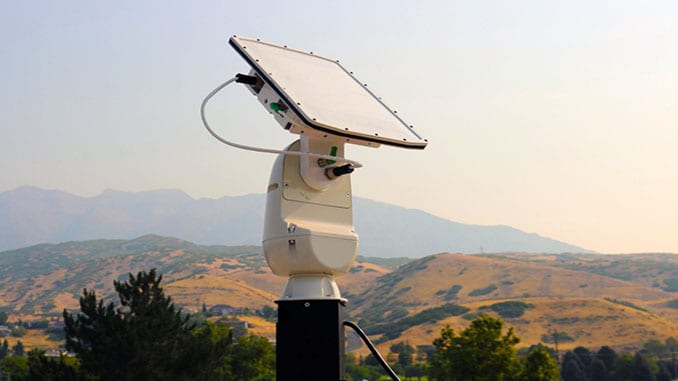 The threat of sUAS (small drones) is dramatically increasing as they become more accessible to the public, both friend and foe. Anyone can buy a drone and utilize it for illegal and harmful activities, such as espionage or delivering payloads into secure or critical areas as seen in the recent attack on the Venezuelan President, Maduro. The alarming fact is that the frequency of such incidents is dramatically increasing. A solution to combat this aerial threat is crucial and has been a high priority of SpotterRF since 2009.

The latest in a line of counter-drone radars from SpotterRF is the revolutionary 3D-500. The 3D-500 is the first radar that creates a full dome drone detection area from 0 to 90 degrees in the vertical and 360 degrees in the horizontal with a single radar that weighs 12 pounds. The 3D-500 radar measures latitude, longitude and altitude of all aerial targets in a 1 km wide hemisphere dome, even directly above the radar with no gaps in coverage. Rapid threat assessment is simple with the automatic detection and 3D tracking of sUAS combined with fully automated camera cueing on the target. Manpower and cost are both reduced with this system while mitigating the threat of undesired aerial presence.

Limitations of Current Solutions
Current solutions are limited in their technical capabilities. Optical and thermal sensors don’t have large enough fields of view to detect targets in the sky. Additionally, they are affected by daily weather conditions, further reducing detection probability. Acoustic sensors are prone to noise pollution and are not able to provide precise tracking of targets. They can be limited in range, often only able to detect several hundred feet out. Radio transmission detection systems are typically limited to known frequencies and cannot detect sUAS that are not being actively controlled by an RF signal. Other radar systems range from large rotating radars with limited vertical coverage leaving large gaps above the radar, to systems that require many different radar panels to be used simultaneously increasing the complexity and the cost.

System Details
SpotterRF is now offering a full drone mitigation system based on the 3D-500. The 3D-500 Counter-UAS System consists of the following: the compact 3D-500, a long-range optical/thermal camera, a small networked hub containing power management and integration software, and an optional mitigation component – often a directional RF jammer on a pan/tilt turret to make even threat response automated.

Using the Full SpotterRF System
Using this system is extremely easy and simple. A typical scenario goes as follows: an sUAS approaches the site and enters the 500 meter detection radius of the radar; the 3D radar automatically detects the target and tracks its location in midair, triggering an alarm to the operator; simultaneously, the PTZ camera is cued automatically to the target in real-time; the operator glances at the screen and assesses the threat in just a few seconds; then a decision to activate the directional RF jammer may be made; triggered, the communication from the controller is actively jammed, which typically sends the sUAS back to the pilot removing the threat from the area; the pilot can then be located and detained. Alternatively, the jammer can be set to automatically apply its threat mitigation protocols if no operator is present to assess the situation.

To analyze the threat of the sUAS, the operator must only look at the screen. The tracking software displays a map of the location of the threat and generates a real-time track of the target as it is detected by the radar. Target information such as GPS position, altitude, and speed is gathered and displayed on the screen. Artificial intelligence is applied to this data to create greater efficiency in identifying which targets are sUAS while filtering out more than 95% of other clutter, such as birds.

Taking the 3D-500 to the Mobile Arena
Compact radar technology also allows for mobility of the entire system. Weighing only 12 pounds, the flexibility of the 3D-500 makes it capable of being set up nearly anywhere in a manner of minutes. Within a couple hours it can be calibrated, configured and ready for full system use on top of buildings, on stadiums, prisons or other structures. This makes it ideal for use in quick deployment applications such as sporting events, concerts, VIP events, or mobile force protection.

This solution is unique in the industry in nearly every aspect. The system is small, has low power usage, and is not affected by inclement weather conditions. It has large volumetric coverage even directly overhead with no gaps in coverage, tracks targets in 3 dimensions, and has high probability of detection with low false alarm rate. The ability to slew-to-cue cameras to midair targets allows for it to be completely autonomous and gives it even greater precision than other solutions which often require unrealistic amounts of manpower. Above all, the 3D-500 system is cost-effective, making it perfect for protecting assets and personnel from the growing threat of drones.

About SpotterRF
SpotterRF provides protection beyond fences with the world’s most advanced Compact Surveillance Radar (CSR) system for perimeter security and force protection. Made in the USA and engineered for extreme conditions, SpotterRF technology is the most compact, lightweight, energy efficient, and cost-effective radar for elite warfighters and critical infrastructure requirements, such as electrical utilities.

For a more information, visit spotterrf.com.