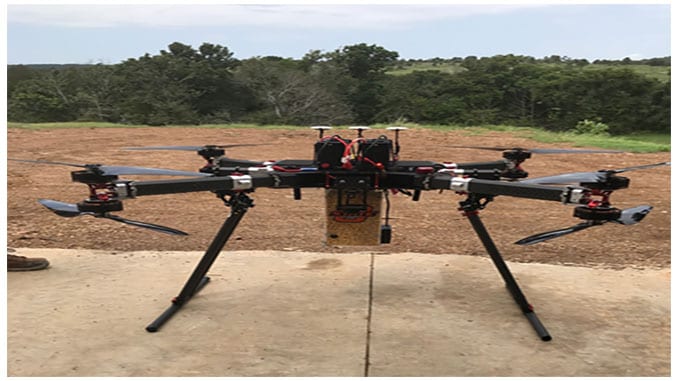 With the help of researchers from Oklahoma State University (OSU), the CNO IPP team operated a small drone, weighing less than 55 pounds – including 10 pounds of feed (dried corn) – to use as bait for an advanced feral hog trap developed by the Noble Research Institute called the BoarBuster™.  The operation was conducted within line of site of the drone pilot. The total roundtrip flight path was around 4,000 feet and demonstrated how drones can be used to improve efficiency and minimize occupational hazards associated with agricultural production. The entire flight operation lasted 10 minutes from take-off (start) to landing (finish).

“It was a history making day at the Choctaw Nation as we began to foster the innovation and utilize a new technology in today’s world,” states Chief Gary Batton.

Feral hogs are a growing problem for the rural and agricultural communities and cause approximately $2 billion in damage to U.S. land and crops each year. Farmers, ranchers, hunters and national and state parks all feel the effect of this damage. They pose risks for disease transmission among livestock, pets and humans, while competing for resources with native wildlife and contaminating water supplies.

Also, this week the CNO team including Intel – flew night missions over tribal property using a night vision camera mounted on an Intel® Falcon™ 8+ drone. This application could be used to search for lost cattle, as well as learn more about the habits and tendencies of local wildlife. In addition, Intel performed the first public demonstration of Open Drone ID, an open standard that offers a potential solution for the remote identification and tracking of drones.

About the UAS IPP Program

The Program is expected to foster a meaningful dialogue on the balance between local and national interests related to UAS integration, and provide actionable information to the USDOT on expanded and universal integration of UAS into the National Airspace System.

For more information about the Choctaw Nation, its culture, heritage and traditions, please go to www.choctawnation.com.

Military, Government And Researchers From Across The U.S. To Attend Counter-UAS