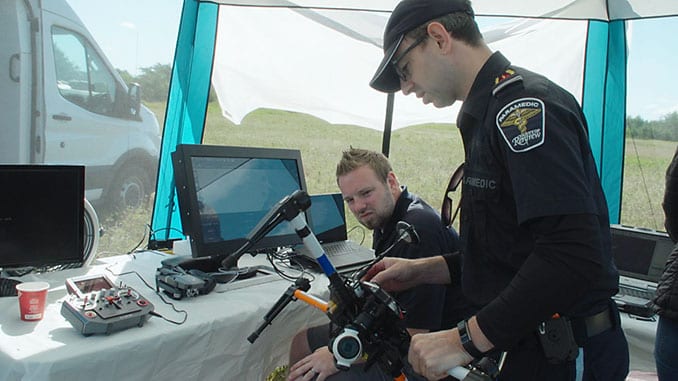 Kongsberg Geospatial Ltd., an Ottawa-based developer of geospatial visualization software, announced today the conclusion of the final trials of a new situational awareness system for emergency airspace management, in a project funded by Defence Research and Development Canada (DRDC).

The trials were conducted at an abandoned airfield near Pembroke, Ontario, with the participation of different groups from Transport Canada, the National Research Council, and the Royal Canadian Mounted Police (RCMP).

The trials included drones being operated by the RCMP, and the County of Renfrew Paramedics, to support several simulated emergency scenarios including a plane crash, a medical emergency, and the protection of a VIP threatened by the approach of a suspicious drone. The trials were conducted with the drones operating beyond visual line-of-sight (BVLOS) at ranges up to 2 km.

By assembling data from all these sources, the EOAMS system allows operators to track and identify a variety of emergency aircraft, and cooperating ground vehicles, while allowing first responders to safely operate UAVs, (Unmanned Aerial Vehicles), in the same airspace.

The EOAMS system can also detect and warn of the intrusion of unidentified, “non-cooperative” UAVs into the airspace. The intrusion of unwanted drones into the skies over disaster scenes is becoming of increasing concern as small consumer camera drones proliferate, since even a small drone colliding with a water bomber or police helicopter could cause a serious accident.

A light aircraft took part in the exercises in tandem with the drones, and was used to simulate different roles, including that of a water bomber.

The trials were conducted like standard emergency training exercises, and lead by an RCMP Incident Commander. Situational awareness drawn from the EOAMS system was used to help inform the response to each simulated incident. Real-time information about the scene was relayed to participants on standard computer displays, and through a Microsoft HoloLens “mixed reality” visor, that overlays sensor information over reality.

At a few points during the trials, non exercise aircraft overflew the area, and were picked up and displayed. The RCMP and Renfrew Paramedics UAV pilots also flew small consumer-model drones like the DJI Mavic to test the system’s capacity to detect very small drones. The little drones were fitted with additional sensors to help determine the precision of their plots in the EOAMS display.

“We were very pleased with the outcome of these trials,” said Paige Cutland, UAS program director at Kongsberg Geospatial, “The EOAMS system performed exactly to specification in every scenario.  More importantly –  in debriefs following the exercise, several participants remarked on how easy it was to interpret the information presented in the EOAMS system display, and how useful that information was to manage the first responder actions.”

The outcome of these trials will be used to inform the development of future emergency airspace management systems for use by first responders, police services, and other government agencies in Canada.

Based in Ottawa, Canada, Kongsberg Geospatial (http://www.kongsberggeospatial.com) creates precision real-time software for mapping, geospatial visualization, and situational awareness. The Company’s products are primarily deployed in solutions for air-traffic control, Command and Control, and air defense.  Over nearly three decades of providing dependable performance under extreme conditions, Kongsberg Geospatial has become the leading geospatial technology provider for mission-critical applications where lives are on the line.  Kongsberg Geospatial is a subsidiary of Kongsberg Defence & Aerospace.