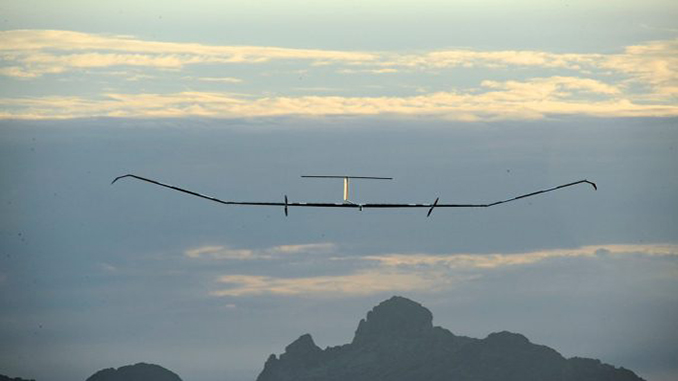 Airbus Defence & Space looks to have earned a new world record for aerial endurance by keeping its Zephyr S solar-powered unmanned aircraft aloft for just minutes shy of 26 days. At 25 days 23h 57min, the maiden flight in Arizona lasted nearly twice as long as the previous record-breaking flight of more than 14 days, set by the aircraft’s predecessor. The company has applied to have the achievement ratified as a world record.

Flying purely on solar power, the aircraft – which has a wingspan of 25m (82ft) but a mass of less than 75kg (165lb) – achieved daytime altitudes of around 74,000ft. Critically, it was also able to remain above 50,000ft overnight while running down its battery power. In a mid-flight briefing at the recent Farnborough air show, Airbus unmanned systems head Jana Rosenmann said remaining at a high altitude through the 24hr cycle was mission critical, as this allowed the aircraft to stay above the weather and commercial air traffic.

Battery management was key to this success, she said, adding that her colleagues believed it would be possible to achieve 100 day-night cycles before the aircraft would need to return to the ground to change batteries. The programme team is now preparing for a next set of flight trials, to begin later this year at Wyndham airfield in Western Australia.

Airbus categorises the aircraft as a High-Altitude Pseudo Satellite (HAPS). The UK Ministry of Defence has three on order, being built at a new factory in Farnborough. While the MoD has not specified its plans for the aircraft, HAPS are seen as supplementary to satellites for Earth observation. HAPS could be fitted with a mission-specific payload and deployed tactically to provide persistent surveillance in response to a natural or human-caused disaster, or to act as a telecommunications relay station.

The Zephyr programme was created by British technology development company Qinetiq in the early 2000s, and later acquired by Airbus.

Zephyr’s endurance record is impressive in view of previous work on solar-powered aircraft. NASA’s Pathfinder flying wing UAV achieved more than 80,000ft in 1998, an altitude record for propeller-driven aircraft. Its successor, Helios, was designed to reach 100,000ft and sustain long-duration flight, but it was lost in air turbulence early in a Hawaii test flight in 2003.

An early success was the solo-pilot Solar Challenger, designed by the late Paul MacCready, founder of UAV pioneer AeroVironment and designer of the first successful human-powered machines, Gossamer Condor and Gossamer Albatross. Challenger’s claim to fame was a 262km (163 mile) English Channel crossing in 1981.

More recently, the piloted Solar Impulse flew for just short of five days to link Japan and Hawaii, the longest leg of its 2015-16 round the world trip. That sortie, at a maximum altitude of 28,000ft, set the endurance record for a solo flight – but overheating damaged the aircraft’s batteries, and repairs and testing meant that it was nearly a year before the journey could resume.