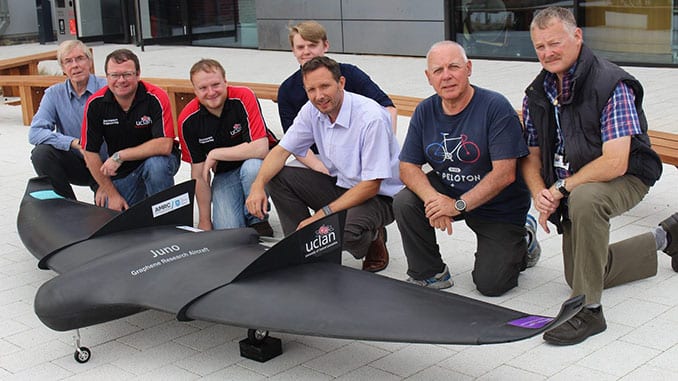 The University of Central Lancashire (UCLan) in the UK has revealed a graphene-skinned unmanned aerial vehicle (UAV) named Juno.

The three-and-a-half-metre wide vehicle is equipped with graphene batteries and 3D printed parts and is the world’s first graphene skinned aircraft.

Haydale provided the graphene and most of the material used in Juno, which is expected to fly and undergo further tests over the next two months.

“Given that Lancashire represents the fourth largest aerospace cluster in the world, there is perhaps no better place to be developing next-generation technologies for the UK aerospace industry.”

Juno was developed as part of a long-term strategic partnership between UCLan and various organizations, which plan to open a £32m EIC facility in February next year.

According to the team involved in the development of Juno, using graphene to build aircraft parts can help the industry to address various challenges such as lowering weight to increase range and payload, overcoming lightning strike and protecting aircraft skins against ice build-up.

Previously, representatives from UCLan conducted the world’s first flight of a graphene skinned wing, as well as launched a specially designed graphene-enhanced capsule into near space using high-altitude balloons.