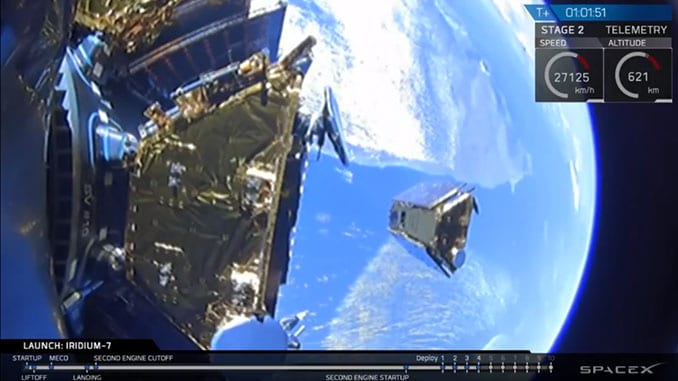 Aireon announced today the seventh successful launch and deployment of its space-based Automatic Dependent Surveillance-Broadcast (ADS-B) payloads, hosted by the Iridium(r) NEXT satellite constellation. At 04:39:30 AM PDT (11:39:30 UTC), a SpaceX Falcon 9 rocket lifted off from Vandenberg Air Force Base in California and placed 10 new Iridium NEXT satellites into low earth orbit, bringing the total number of Aireon payloads in orbit to 65. This leaves just a single launch of 10 more Iridium NEXT satellites and their Aireon payloads before the launch campaign concludes later this year. The Aireon system is scheduled to go live in 2018 with operational deployment beginning shortly after that domestically in the Edmonton and Gander Flight Information Regions. Operational trials in oceanic airspace over the North Atlantic will begin in early 2019.

“We’re getting closer to the finish line,” said Don Thoma, CEO of Aireon.  “Perhaps most exciting though is that the system has been functioning beyond expectation, resulting in even greater coverage redundancy than initially planned.  We’re seeing double coverage, and in many cases triple redundancy from our payloads before the constellation is even completed.  With this seventh successful launch completed, we’re now preparing to begin a new era for the aviation industry.”

The Iridium NEXT satellite constellation will consist of 66 low-earth orbit crosslinked satellites that blanket the earth with pole-to-pole coverage.  When pairing the Aireon service with the real-time communications capabilities offered by Iridium, such as Controller Pilot Data Link Communications (CPDLC) or Iridium SATCOM Voice, pilots flying oceanic and remote routes will be in real-time contact with air traffic controllers enabling them to obtain route adjustments and maximizing the benefits of Aireon’s air traffic surveillance.  Iridium is the only satellite communications provider that covers the entire globe, ensuring that wherever an aircraft may fly, it will always remain in coverage with real-time communication.  This capability has become increasingly important as airlines fly more routes over the North Pole, dramatically reducing flight time and fuel cost.

“Iridium and Aireon share the same Iridium NEXT network, though they operate through separate payloads and on-board antennas, with Iridium utilizing the main mission antenna and Aireon utilizing its own custom-designed hosted payload,” said Matt Desch, CEO of Iridium. “This combination creates a unique multi-purpose satellite network providing aircraft connectivity and surveillance with multiple built-in redundancies.  No other pair of companies can come close to offering such revolutionary capabilities.  We look forward to seeing the full constellation operational later this year and bringing all of these capabilities to life.”

A total of 81 Iridium NEXT satellites are being built, all of which will have the Aireon payload onboard.  Currently, 75 satellites are planned to be deployed with nine serving as on-orbit spares and the remaining six as ground spares. The constellation is planned for completion in 2018.

For more information about Iridium NEXT, visit www.IridiumNEXT.com