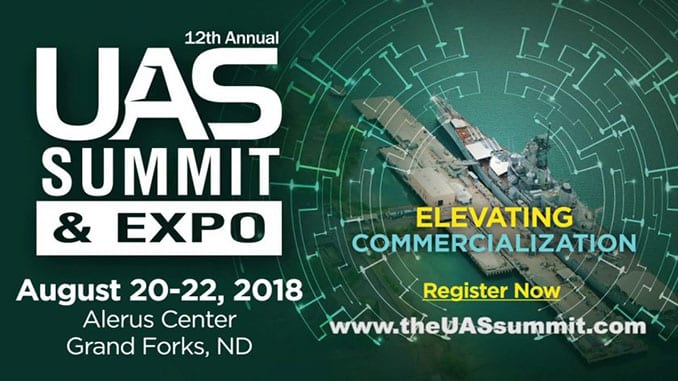 “North Dakota is one of the major industry hubs for commercial UAS activity,” says John Nelson, sales & marketing director for UAS Magazine. “This year’s event will showcase every sector of the UAS industry and match commercial UAS service providers with attendees looking to better understand new technologies and services.”

The 2018 program will provide in-depth analysis and timely presentations from 40-plus speakers focused on the following for both small and large unmanned aircraft systems:

The Summit, taking place in the “Silicon Valley of Drones,” offers the most open airspace in the country, vast tracts of farmland, infrastructure to test on and the nation’s first unmanned aircraft degree program. Now in its 12th year, The Summit will match UAS service providers with end-use clients through an event special-pass and will conclude on Wednesday with a tour of the University of North Dakota’s UAS Center lab.

“Similar to last year, we’ll have remarks from the North Dakota congressional delegation and state leadership,” says Luke Geiver, editor of UAS Magazine. “We’ll also have input from the world’s leading UAS test site, as well as UAS flight and operation demos in the Alerus arena.”

To view the final agenda: www.TheUASsummit.com

Boeing, SparkCognition To Shape The Future Of Travel And Transport