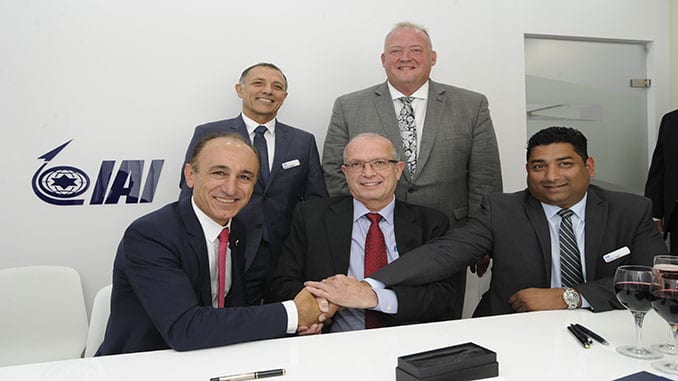 Sierra Nevada Corporation (SNC) signed a strategic collaboration agreement with Israel Aerospace Industries (IAI) today to support the development of a new tactical Vertical Takeoff and Landing (VTOL) Unmanned Aircraft
System (UAS) able to take off and land vertically for the U.S. market. The companies see great potential in this collaboration for special mission applications in the American tactical UAS market over the next decade as the increased use of unmanned aircraft continues to enhance the operational flexibility, safety and effectiveness of U.S. military air operations.

“SNC looks forward to a bright future in the unmanned systems sector with the signing of this strategic agreement with IAI,” said Tim Owings, executive vice president of SNC’s Integrated Mission Systems business area. “We are pleased to have IAI’s strong past performance and exciting new products like VTOL UAS as the foundation of this mutually beneficial relationship between the two companies.”

The VTOL UAS will give forward-positioned units the ability to deploy expeditionary wide-area UAS Intelligence, Surveillance Reconnaissance (ISR) assets in austere environments without needing access to a runway, while providing increased safety and reduced risk throughout the range of operations and mission locations.

This agreement builds on a five-year relationship between the two companies, combining SNC’s experience developing and testing customizable UAS in various launch conditions and environments with IAI’s vast expertise and capabilities to create an innovative VTOL solution for the tactical UAS market.

SNC‘s experience executing large-scale system integration programs for the U.S. Government and its leading in-house engineering capabilities, along with IAI’s world-renowned unmanned systems will result in a product that will be manufactured, operated and maintained in the United States. As the prime contractor, SNC will be responsible for the overall system integration and leading the U.S. marketing effort in support of direct sales and long-term lease opportunities. This partnership is aligned with U.S. policy and is expected to generate new jobs in Mississippi
and Alabama as part of the expanding UAS program.

“IAI is excited to sign the strategic agreement with SNC, with whom we have been working successfully for a number of years now,” said Shaul Shahar, executive vice president general manager of IAI’s Military Aircraft Group. “I am confident that SNC’s leading engineering expertise and strong U.S. foothold combined with IAI’s experience and leadership with unmanned systems, including VTOL, will create a high-quality American system to meet the
market’s growing”

Sierra Nevada Corporation
Sierra Nevada Corporation (SNC) is a trusted leader in solving the world’s toughest challenges through
advanced engineering technologies in Space Systems, Commercial Solutions, and National Security and
Defense. With applications including navigation and guidance, communication and surveillance systems,
electronic warfare, aircraft systems and telemedicine, SNC provides state-of-the art solutions to military
and commercial customers around the world. SNC has been honored as one of the most innovative U.S.
companies in space, a Tier One Superior Supplier for the U.S. Air Force, and as one of America’s fastest
growing companies. For more information, visit www.sncorp.com.

No Replies to "SNC & IAI Partner to Co-develop a Tactical VTOL UAS for U.S. Government Market"