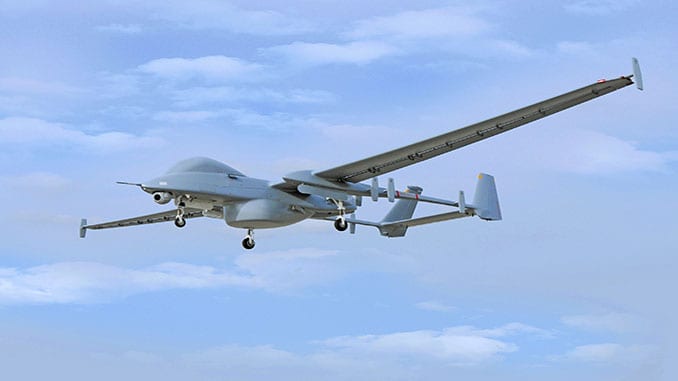 Israel Aerospace Industries (IAI) is upgrading its capabilities for the maritime arena with anti-submarine capabilities in its marine Remotely Piloted Air Systems (RPAS). The new capabilities respond to the need arising from the discontinuation of the “Shahaf” manned Sea Scan maritime jet by the Israeli Navy and the growing use of IAI Heron RPAS for maritime patrol missions, which created a need in anti-submarine capabilities launched directly from the RPA. The maritime RPA, which carries a range of dedicated payloads, now has two new payloads for submarine detection: the Sonobuoy (acoustic detector) and the MAD (Magnetic Detector).

The Sonobuoy is a small, lightweight innovative sonar float which is hurled out of the RPA with a parachute.
Part of the Sonobuoy submerges in the water and part of it remains above water, emitting and receiving
acoustic signals in high seas. The findings are transmitted in real-time to the RPA’s control post. The MAD
is a RPA-mounted device that detects and alerts on submarines through the identification of changes in the
magnetic flow (metal objects detection). The two detectors complement one another: the Sonobuoy is used for searching a broad areas while the MAD is used to verify that the object is a submarine, including an up-to-date location. The RPA carries several Sonobuoys, which it hurls accurately into the sea whenever the presence of a submarine is suspected.

The use of RPA-mounted anti-submarine means offers significant advantages, including longer stay time
(dozens of hours on air), back-transmission of the sonar for many hours, operators who are located on land
and can monitor the situation over multiple shift, and most importantly, the absence of risk to human life.
Shaul Shahar, IAI executive vice president general manager of the military aircraft group, commented, “The maritime Heron RPA has proved its efficacy for the Israeli Navy as well as for other clients. The addition of anti-submarine capabilities expands the RPA’s operational scope, while opening up new markets for IAI.

As the home of the world’s advanced technologies, IAI is thrilled and proud to become one of the first to offer a solution of this type. In an age with growing submarine threats, the use of these systems will improve nations’ security across the seas, including in their economic water and seaports.”