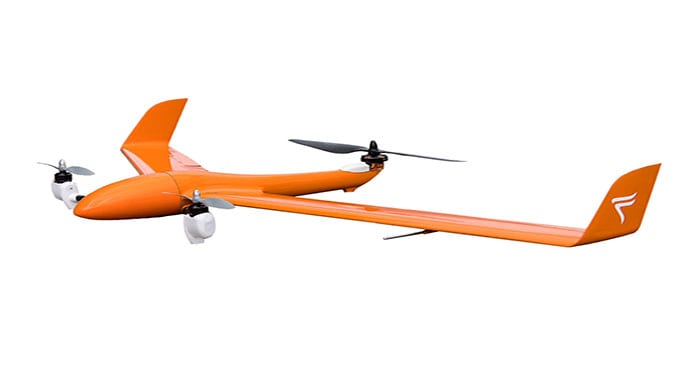 The FlightWave Edge™ UAS was part of a high-tech flotilla of underwater vehicles (AUVs), autonomous surface vessels (ASVs), and unmanned aerial vehicles (UAVs) being used on the research ship R/V Falkor in an area of the Pacific Ocean approximately 1,000 miles west of Southern California in an area called the Subtropical Front. The mission: Establish a new method for observing dynamic ocean systems and processes with autonomous vehicles that maintain constant communication between themselves and a remote control center on the Falkor.

The ecological mysteries of the Subtropical Front are extremely important for scientists to unravel and understand, and also offer a highly valuable opportunity for researchers to experiment with the simultaneous management of multiple autonomous vehicles.

Principal Investigator João Tasso de Figueiredo Borges de Sousa of the Laboratório de Sistemas e Tecnologias Subaquáticas (LSTS) from Porto University and his team led the effort, along with researchers from the Interdisciplinary Centre of Marine and Environmental Research (CIIMAR), a leading research and advanced training institution of the University of Porto in Portugal; Technical University of Cartagena in Spain; Norwegian University of Science and Technology in Norway; and U.S. researchers from Harvard, University of Rhode Island, and Lamond-Doherty Observatory.

The Edge was part of a group of autonomous marine vehicles being used to map out ocean fronts. Researchers used it to try out three types of sensors: a thermal camera to measure sea surface temperature, a multispectral camera to detect plankton, and a special sensor made by NASA that measures a gas called DMS emitted by plankton.

“Operating from a ship out in the middle of nowhere enabled us to demonstrate the Edge’s versatility and airworthiness,” said FlightWave co-founder and CTO Trent Lukaczyk, Ph.D. — who was part of the team at sea. “And there&#39;s only one good place to land: back on the ship. The Edge’s VTOL and payload swapping are important capabilities out here. And networking into a system of autonomous assets via the Falkor’s network and supercomputer put this demo on a whole new level.”

The Falkor set sail on May 28 and returned to port on June 17.

Discover more about the Edge at FlightWave.aero.