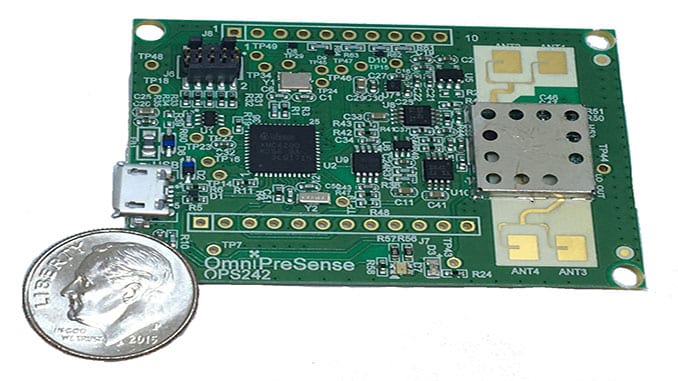 OmniPreSense Corporation, an innovative supplier of Short-Range Radar (SRR) sensors, today announces its newest radar sensor with a smaller form factor and FCC modular approval. The OPS242 is 30% smaller than the
previous OPS241 radar sensor, supporting space constrained applications. The OPS242 also provides FCC modular approval to simplify customer development and speed release to production. With a detection range of 10m for people and up to 25m for cars, the OPS242 is an ideal solution for traffic monitoring systems.

The OPS242 short-range radar detects motion, reporting speed and direction of objects in its field of view. With a top detection speed greater than 140mph, the OPS242 can handle the fastest of car traffic. A simple application programming interface (API) provides direct control of the OPS242, allowing changes to reported units (m/s, mph,
etc.), transmitted power, and other useful settings.

New for the API is the reporting of multiple objects in the sensors field of view. As many as 9 different reports for speed and magnitude are available. Magnitude information consists of size, reflectivity, and distance information for the objects detected. This is most beneficial for traffic monitoring solutions. Multi-object detect is yet another feature that competitive solutions such a passive infrared (PIR) or ultrasonic sensors cannot provide.

Pricing and Availability
The OPS242 is priced at $189 in single unit quantities and will ship in August. The company will be demonstrating the OPS242 at the Sensor Expo held in San Jose June 27-28th .

The OPS242 can be ordered from the company website at www.omnipresense.com or from their distribution partners.