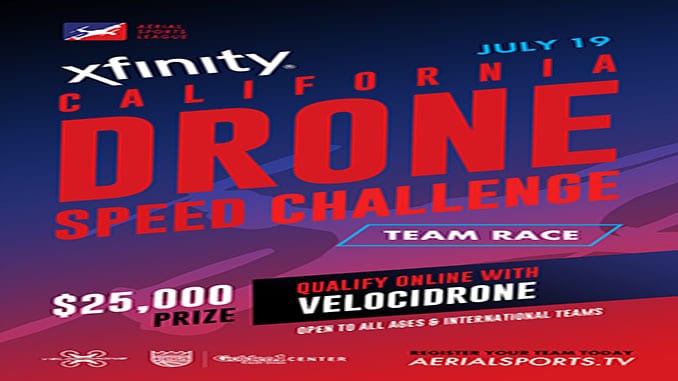 In a celebration of speed and to promote its Gigabit Internet service for both Xfinity residential and Comcast Business customers, Comcast will partner with the Aerial Sports League to host The Xfinity California Drone Speed Challenge – Level 2.

Starting this month, drone pilot teams will compete in a multi-week, eSports-style “virtual qualifier” series through the VelociDroneracing simulator and the winning teams will move on to compete live on July 19 for the championship at Golden 1 Center in Sacramento, CA. That venue, considered one of the world’s most connected indoor sports and entertainment venues, is powered by two, 100 gigabit Ethernet Internet circuits from Comcast Business.

A record-breaking $25,000 prize purse and ultimate bragging rights are up for grabs as the fastest drone teams compete in California’s biggest drone racing event. Comcast will also contribute another $25,000 to a local non-profit organization in the name of the winning team.

“After the success of last year’s race, we wanted to do something even more spectacular to promote the blazing fast Gigabit Internet speeds we are bringing to our California customers,” said Elaine Barden, Comcast California’s Regional Vice President, Residential Sales and Marketing. “Combining eSports and drone racing is the ideal way to celebrate the super-fast broadband service Comcast delivers to our customers throughout the state.”

Attendees will also have an opportunity to learn about and experience all the latest products from Comcast, including Xfinity Gigabit Internet, the X1 video platform, xFi, Xfinity Home and Xfinity Mobile, as well as offerings from Comcast Business. Gigabit Internet speeds are available to Comcast customers throughout California and include access to nearly 19 million WiFi hotspots across the country. Combined with the company’s Xfinity xFi platform, customers have access to the fastest speeds, the best coverage, and ultimate WiFi control in their homes.

“This will be a unique crossover event featuring both drones and eSports in a single competition,” said Marque Cornblatt, CEO of Aerial Sports League. “We anticipate that a diverse group of some of the best pilots and gamers will qualify, but teams will need to demonstrate a wide range of skills and teamwork if they hope to reach the podium.”

The event is not open to the general public. Media who wish to attend can contact Joan Hammel, joan_hammel@comcast.com, or Monica England, monica@aerialsports.tv.

The Aerial Sports League (ASL) is a worldwide leader in drone sports, entertainment and media. Since 2012, the ASL team has been creating and promoting drone sports around the globe. ASL has hosted 1,000,000 spectators at live events since 2015, has earned nearly 10 million video views and over 50,000 social media followers. ASL was an early pioneer of drone education and has taught thousands of students to build & fly drones through STEAM education programs. ASL is currently developing the Museum of Future Sports, a first-of-its-kind STEAM education lab & multi-use sports venue dedicated to professional eSports, drone racing and robot combat games. More information is available at www.AerialSports.tv.