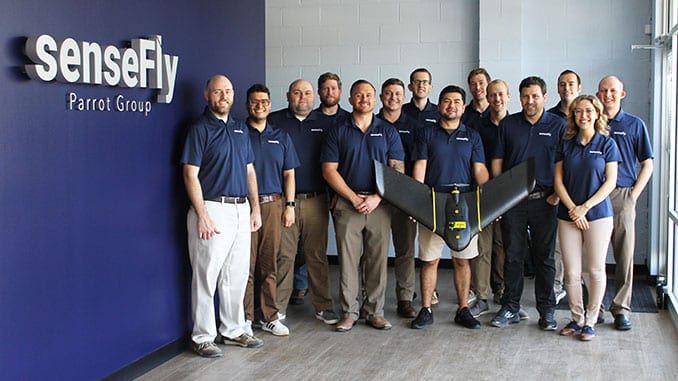 senseFly, the industry’s leading provider of professional mapping drones, and a commercial drone subsidiary of Parrot Group, today announces the relocation of its North American operations to Raleigh, N.C.

Previously located in Washington, D.C., the company’s new office will accommodate its rapid growth and its location allows senseFly to join the Research Triangle, a growing network of technology leaders.

“Our move to Raleigh reflects our dedication to meeting our customers’ needs through innovation,” said senseFly CEO Gilles Labossière. “Not only is Raleigh one of the fastest growing cities in the United States, but it also has one of the strongest technology scenes, making it a natural fit for our dynamic team.”

“We’ve already enhanced operational efficiencies, allowing us to deliver exceptional service to our customers in the region,” Labossière added.

The Research Triangle is a region in North Carolina that boasts three prestigious research universities: North Carolina State University, Duke University and the University of North Carolina at Chapel Hill. The move positions senseFly alongside these higher learning institutions, creating more resources for the unmanned aircraft system (UAS) industry to thrive within the state.

“We are thrilled to have senseFly join the Triangle’s network of innovative businesses,” said Michael Haley, Executive Director of Wake County Economic Development. “This announcement represents another company moving to our region to access our incredible talent pipeline, diverse business ecosystem, and exceptional quality of life.”

senseFly has already begun integrating itself into the community through its partnership with NextGen Air Transportation Consortium (NGAT), a consortium at North Carolina State University that supports more than 20 members (industry, government agencies, and academia) with UAS implementation strategies, integration timelines, and navigating the regulatory and approval processes at federal and state levels.

“The NGAT Consortium is nationally recognized for its development and integration of aviation technology,” Labossière said. “A specialized focus on UAS was critical for senseFly when determining which organization to partner with.”

“We are excited to see senseFly move into the neighborhood and join the NGAT Consortium,” said Kyle Snyder, Director of NGAT. “senseFly has a proven history of success in drone product development and is also an industry partner on the FAA’s UAS Center of Excellence team, ASSURE, which we are a core member of with 20 other schools. We are looking forward to them being a major part of the state’s drone ecosystem.”

To learn more about senseFly, go to www.sensefly.com.