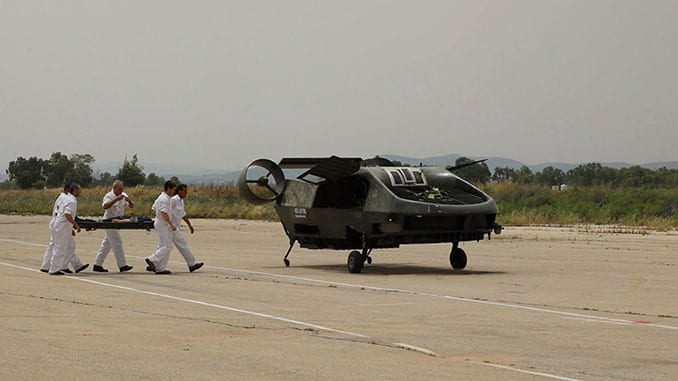 On May 7th, Tactical Robotics (a subsidiary of Urban Aeronautics Ltd), based in Yavne. Israel, successfully performed a ﬁrst “mission representative” demonstration for its lead customer, the Israel Defence Forces. This milestone was announced for the ﬁrst time today at the Israel Combat Rescue and Emergency Medicine conference where the company also presented Cormorant’s capability to be the ﬁrst UAS system ﬁelded for unmanned casualty evacuation missions.

The demo took place at Megiddo Airﬁeld in the Galilee and consisted of taking oﬀ with a load of cargo, performing a pre-planned ﬂight to a speciﬁed point of delivery, oﬄoading the cargo, and loading of a specialized, medical training manikin simulating a casualty which was then returned to the point of origin. A monitor supplied by the IDF’s chief surgeon Trauma Branch (see Tactical Robotics’ May 2017 update) transmits vital information to the crews on the ground, in addition to a video camera for two-way communication with the patient. With the exception of the loading of the ‘casualty’ and oﬀ-loading of cargo, the entire simulated mission was performed autonomously.

The demonstration, a combination of cargo delivery and casualty evacuation, reﬂects Cormorant’s unique dual-role capability as the only UAS recognized by NATO to fulﬁll both cargo delivery and CasEvac missions. As such, the aircraft is designed to exceed the standard reliability and handling qualities required of a typical, tactical UAS in order to meet the requirements to safely ferry human “cargo” back from the battleﬁeld.