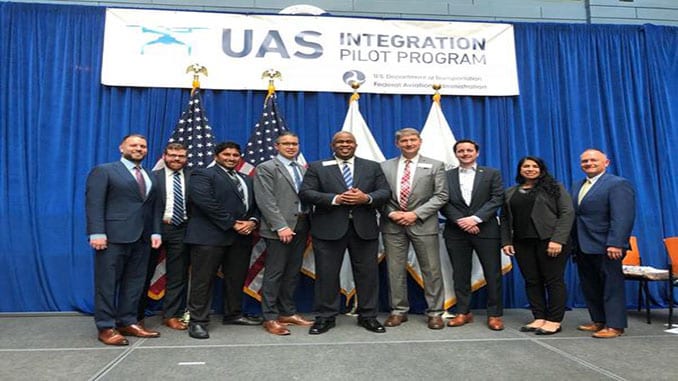 PrecisionHawk Inc., a leading provider of enterprise drone technology, today announced that it was selected to participate with its home state of North Carolina in 1 of 10 pilot programs focused on drone integration, introduced by the Trump administration last year. The project was chosen by the Department of Transportation (DOT) from 150 applications submitted by 200 businesses, including companies like Alphabet, Apple, FedEx, Boeing, AT&T and more.

“We commend the White House for recognizing the significant business potential that drones bring to agriculture, commerce, emergency management, human transportation and other sectors,” said Diana Cooper, senior vice president of policy and strategy at PrecisionHawk. “These partnerships present a unique opportunity to advance UAS technologies in local industries, and we thank the Administration for its investment in American aviation and for sharing our vision of a regulatory roadmap that encourages innovation while ensuring airspace safety.”

PrecisionHawk will join the North Carolina Department of Transportation’s (NCDOT) under the Unmanned Aircraft Systems Integration Pilot Program (UAS IPP) to accelerate the testing of currently restricted UAS operations, including beyond visual line of sight (BVLOS) flights. Over the next three years, the program will work to bring unmanned medical supply delivery and develop unmanned traffic management systems to track drones as they fly.

PrecisionHawk’s involvement with the NCDOT underscores its advanced commercial UAS technologies offered across multiple industries. The program will be able to leverage its expertise in BVLOS flight, as detailed in its Pathfinder Report recently delivered to the FAA, which outlines a comprehensive safety case and standards to fly drones BVLOS. BVLOS flight has been the missing link to companies exploring commercial drone applications for package delivery and PrecisionHawk’s blueprint, combined with its assistive technology and data, unlocks the unlimited capacity that the sky offers for such applications.

“Drones have proven to be a transformative force for business intelligence and operations, and today’s decision by the FAA amplifies this opportunity by bringing together the public and private sectors to embrace innovation while balancing the safety and security of our nation’s airspace,” said Michael Chasen, CEO of PrecisionHawk. “Our work with these exemplary agencies will open up the skies for drone flight over long distances—an imperative for commercial drone applications—and unlock the next generation of American aerial intelligence and innovation.”

The UAS IPP is an opportunity for state, local and tribal governments to partner with private sector entities to engage with the federal government to promote the use of drone technology, address concerns related to their deployment and generate data to inform smart public policy. The program commenced in November 2017 following the Trump administration’s recognition of the significant role that drones have in the 21st century economy and desire for public and private entities to collaborate and solve the challenges that have previously hindered the integration of drones into national airspace.

The results of the IPP will pave the way for new and expanded commercial UAS operations, as the FAA incorporates lessons learned into the regulatory framework.

About PrecisionHawk
PrecisionHawk is a leading provider of drone technology for the enterprise. PrecisionHawk’s client list includes Fortune 500 companies and market leaders in 150 countries, spanning a range of industries, including agriculture, energy, insurance, government and construction. To date, PrecisionHawk has raised more than $100 million from leading venture capital firms including Third Point Ventures and Millennium Technology Value Partners, with strategic investments from enterprise customers and partners including Comcast Ventures, DuPont, Intel Capital, NTT Docomo, and Yamaha Motor. The company, founded in 2010, is privately held and headquartered in Raleigh, NC.

More information about PrecisionHawk can be found at www.precisionhawk.com