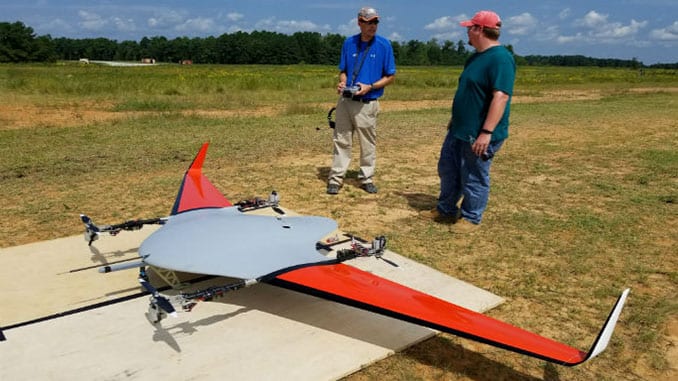 Textron Systems unveiled its X5-55 vertical take-off and landing engineering testbed at the AUVSI Xponential show in Denver, Colorado, on 1 May.

The company developed the aircraft to meet demands from military customers for an unmanned air vehicle that is able to nimbly take off and land vertically from tight spots, while retaining the ability to fly efficiently over long distances.

“There are multiple ways to get out of a confined space, but with a separated lift and thrust system, like [the Aerosonde], you have a bigger footprint to transition to fixed-wing flight,” says Baity.

“With the vector thrust technology in the tilting rotors I can deliver my energy that keeps me in VTOL into transition quicker. So, I can get more aggressively out, to the point where the operator can only know that he can see blue sky, and press a button and the aircraft will transition out.”

The experimental aircraft was first flown in July 2017 and has a gross take-off weight of 34kg (75lb), Baity says. The UAV can carry a payload of almost 2.3kg and has an electrical power capacity of 50W. Its range depends on the payload, but is around a 100nm (200km), the company says.

The X5-55 is built to take full-motion video for intelligence, surveillance and reconnaissance purposes, as well as operate as a communications relay and electronic warfare platform.