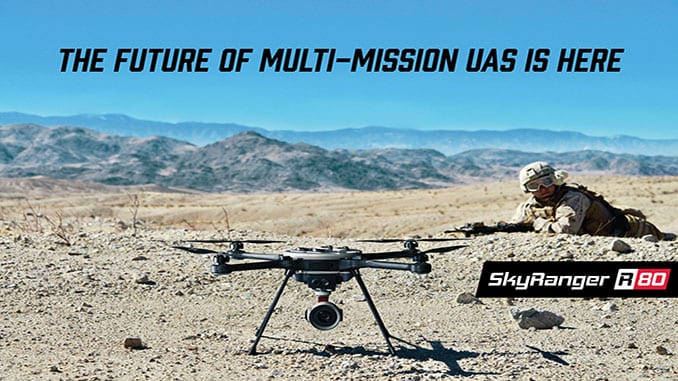 Aeryon Labs Inc, a leading provider of high-performance drones for military, public safety, and commercial customers, today unveiled the SkyRanger R80 – the newest addition to Aeryon’s family of SkyRanger Unmanned Aircraft Systems (UAS). Designed with, and for, the most demanding UAS operators within the defense and security markets, the R80 establishes a new benchmark for small UAS performance and reliability. The R80 carries forward the hallmarks of the original Aeryon SkyRanger (renamed the SkyRanger R60) which has amassed over 100,000 flight hours and is deployed in over 30 countries.

The new SkyRanger R80 is a robust, multi-mission UAS that provides reliable operations in harsh environments and demanding weather conditions. With a wide range of next-generation hardware and software features, the R80 delivers:

SkyRanger R80 has a payload capacity of up to 2kg, enabling it to carry heavier optics and multi-sensor payloads that were previously restricted to much larger, more expensive fixed-wing UAS. With the new Osprey carry and delivery payload, R80 operators can attach and deliver nearly any object up to 2kg such as radios, ground sensors, medkits, life vests, and more. The R80 adds a new front-mounted EO/IR payload (with image fusion) to supplement bottom-mounted, non-camera payloads.

The R80’s new PDK extends payload development to end users and third-party integrators, enabling the rapid development of mission-specific payloads for the R80 platform. The R80 also offers an ADK to interface with other control applications across a set of secure APIs.

The R80’s power is delivered from four redundant batteries, each rated below 99Wh for easy transportation on commercial aircrafts. With its simple plug-in tether kit, co-developed with Hoverfly Technologies, Inc, the R80 can provide persistent endurance for long-term overwatch or surveillance applications, then can be easily reconfigured quickly back into free-flight mode.

With multiple embedded NVIDIA TX2 processors, the R80 is a flying supercomputer with an engine for real-time artificial intelligence at the network edge, including object detection and classification. To enable autonomous operations or flight in GPS-denied environments, the R80 includes multiple sensors providing flight control inputs, including four dedicated computer vision cameras.

Building off the proven SkyRanger R60 platform, the R80 offers a rugged carbon fiber and magnesium airframe, tested to IP-54/MIL-810G environmental tolerances. The R80 can withstand sustained winds up to 70 kph, and operate up to 15,000’ MSL under its standard propulsion configuration. Mission success is underpinned by two fully redundant communication links, and two flight computers. For operations in denied RF environments, or beyond visual line of sight (BVLOS), the R80 is able to execute semi-autonomous missions without an active wireless link.

To meet the unique requirements of the United States Department of Defense and its other federal customers, Aeryon Defense USA (a wholly owned U.S. subsidiary of Aeryon Labs), will customize the commercially available SkyRanger R80, which will be known as the R80D. Delivery of the R80D will begin in May 2018.

The R80 will be publicly unveiled at an Apr 30th press conference at AUVSI XPONENTIAL in Denver, CO and will be on display at Booth #2207 on the exhibition floor.

The SkyRanger R80 is available to global defense and security customers starting in late 2018 through Aeryon Labs.

To learn more about the SkyRanger R80 visit www.aeryon.com/skyranger/r80

Elistair Announces Its Ligh-T Version 3, The Next Generation Of Compact Tethered Drone Stations

No Replies to "Aeryon Announces The Next Generation SkyRanger R80 Drone"