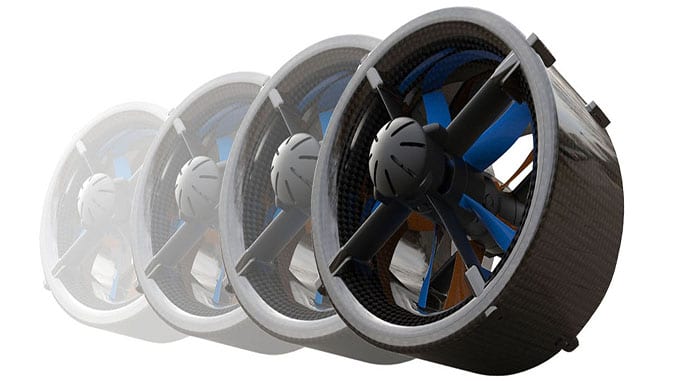 April 2018 saw another technology leap when Neva announced that it has boosted the maximum thrust of its Athena turbine, with its new version V1.62, weighing just over 1kg to 3.4kgf (36N).

This advance has been achieved by improving the shroud geometry and changing motorization. It allows better-distributed propulsion for aircraft and drones.

Neva Aerospace turbofans are uniquely optimized for vertical and short takeoff and landing (VTOL & STOL). They are intrinsically safe and sustainable as there are no uncaged rotors.  Remarkably light and powerful and meet engineers’ needs for power, control and safety as they design commercial drones and electric aircraft for practical applications where payload and range are critical. These will range from logistics and long-distance surveying to providing stable platforms for aerial robots.

The breakthrough technology of the Athena Series ETFs will displace uncaged rotor blades in the current commercial drone applications and is creating exciting new possibilities for the development of the next generation of unmanned aerial systems.

NEVA AEROSPACE is a European consortium based in the United Kingdom. We partner with key clients, technology suppliers, and financial institutions to develop technologies for unmanned air vehicles (UAVs), unmanned air cargo(UAC), aerial robotic platforms (ARP), and electric aviation. Neva has a portfolio of patents and technologies which are among the most advanced worldwide.

Neva Aerospace offers turnkey solutions based on autonomous, low-emission aerial robots capable of carrying 2kg to 2 tonne payloads, as well as OEM propulsion solutions. Under development since 2009, our electrical aviation systems are designed to perform precise tasks and services. Capable of both vertical take-off and landing (VTOL) as well as horizontal flight, they have the accuracy needed to operate in congested urban environments. Their remarkable stability in flight will ensure that they are also reliable over long distances and as platforms for delicate service and maintenance work.