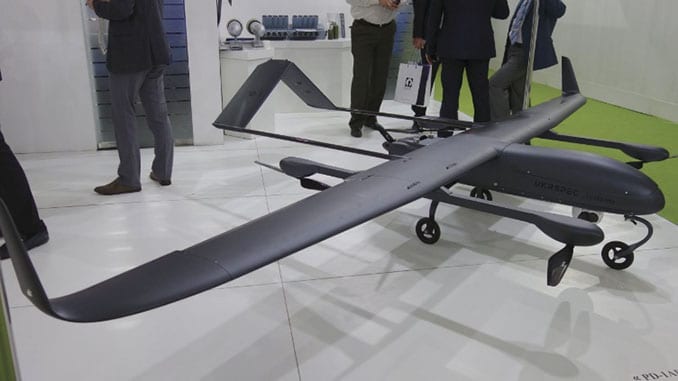 The company’s general manager, Jacob Cereteli, told Jane’s that the conventional fixed-wing UAV has now been fitted with four electrically powered rotors, two on each wing, which enables for VTOL operations.

The system has an endurance of more than 10 hours and can carry an improved payload of 10 kg, an improvement from the 8 kg in an earlier version. The UAV has a service ceiling of 3,000 m, with operational range of more than 500 km when fitted with an on-board 150 W generator.

Its surveillance capability is stated as 100 km, and can be fitted with a range of payloads, including high-definition video cameras, and light detection and ranging (LIDAR) sensors. Output from these sensors can be streamed in real time to the operator. The UAV can also be equipped to dispense two self-inflatable life-saving buoys.

The PD-1 utilises the AES-256 encrypted digital datalink, and is equipped with an inertial navigation unit. It can take off and land conventionally on runways that are at least 100 m, or launched using a catapult and recovered with an in-built parachute.

The UAV has a maximum take-off weight (MTOW) of 40 kg, is powered by a four-stroke engine, and can attain a cruising speed of 25 m/s. The PD-1 can broadcast multiple portable video terminals within a range of 50 km, and these feeds can also be integrated into artillery combat systems to assist with target identification and fire

The UAV features a composite airframe with no metal parts, which makes it lighter and less prone to detection. In fully autonomous mode, the system has an endurance of 10 hours, and an operational range of 400 km.