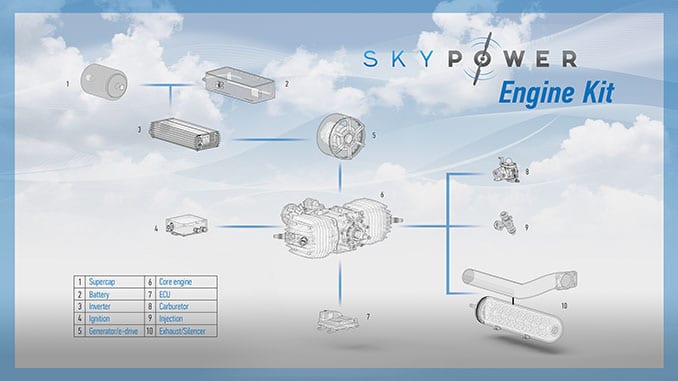 We’re seeing ever-stronger and for application-oriented solutions&quot;, explains Karl Schudt, managing
director of Sky Power GmbH. That’s why we considered how we could best serve this demand, since each
customer favours his own solution. In the past, UAS manufacturers were just interested in getting their flight
systems into the air. That’s why propulsion units were often relegated to a subordinate role. This has changed
permanently in recent years. Today, UASs have got to fly efficiently and be tuned exactly to their application
area&quot;, explains Schudt further. Out of this came the first engine construction kit for UAS systems from Sky
Power and 3W-International with which customer- and application-specific propulsion solutions can be quickly
visualized and implemented.

The engine construction kit consists of widely different components. At the centre is the basic engine, which
can be equipped with both a carburettor and the new injection from Sky Power. To this is added as desired
exhaust, silencer, and the new ECU and ignition. The engine can furthermore be provided with an e-drive or
generator, which uses a converter to generate electrical energy for batteries and super capacitors — so-called
supercaps.

Super capacitors can be charged and discharged very much faster. Besides, they withstand a lot more switching
cycles than rechargeables, so they lend themselves as substitutes for the latter whenever severe switching
stress is required. Super capacitors&#39; application area stretches from provision of the weakest currents for data
retention in static memories (SRAM) up into the power-electronics range, thus for instance, as the store of
electrical energy in the KERS system in Formula-1 racing cars. This is also exactly the property required in UAS
propulsion units when they’re used as a hybrid system or to feed in energy to enhance the engine&#39;s short-term performance.

All 3W-International engines can be equipped with this e-drive supercap system. The engine can therefore, be
used as a pure power generator for electrical motors, but also as a combined system in which electrical and
combustion energy can be used in combination. Pure usage from combustion energy is likewise possible. The
customer&#39;s performance parameters and application area determine the engines usage type. At the trade fair, we will show visitors which modular components are necessary for an electrical emergency system, for direct
engine use, for a range extender, and for hybrid applications”, explains Schudt. The hybrid application is being
accorded a lot of attention at Sky Power because the demand for such propulsion solutions continues to
intensify. Hybrid drive units are going to be the propulsion source for unmanned systems in future&quot;, continues Schudt.

The engine construction kit necessitates the propulsion manufacturers early involvement in the customer’s
project. Here not only the right components are sought out, but they’ve also got to be tuned to one another.
Thus for instance, the silencer must be orientated towards the basic engines cylinder volume in order to
prevent a performance-diminishing backing up of exhaust gases. The e-drive must be selected based upon the
desired electrical power and the ECU must be calibrated to the propeller used, the desired flight performance,
and the flight surroundings. The same applies to the use of carburetors or injection. In addition, the customer
requirement decides about the use. For instance, cost-optimized carburetors make sense for target drones,
whereas a carburetor must be discouraged in the case of performance-optimized engines.

“Many details must be clarified with the customer before initial engine assembly. So we’ve got to maintain
tight information exchange with the customer. After all, he’s getting an individualized product that has to
conform with defined parameters. That’s why we’ve invested in additional in-house test systems in order to
demonstrate the engine performance that the customer wants, Schudt continues.

The engine construction kit is being introduced in 3W-International GmbH’s booth 2210 at Xponential 2018.