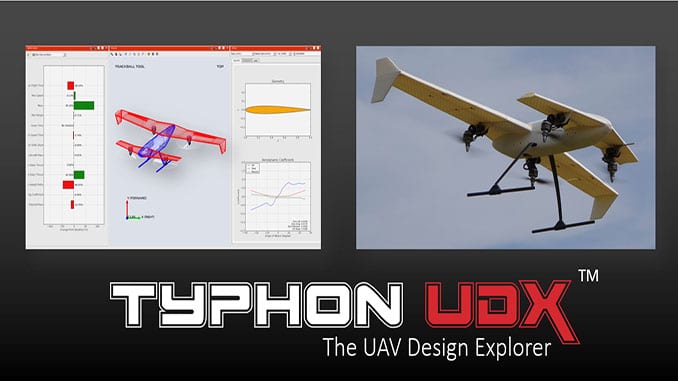 One of the most exciting evolving niches within unmanned aircraft systems and personal aerial vehicles is that of hybrid Vertical Take-Off and Landing (VTOL) aircraft, which provide a middle ground between the efficiency of fixed-wing aircraft and the practicality of multicopter aircraft.

Designing VTOL aircraft poses unique engineering challenges because of the opposing design requirements of hover and forward flight. ComQuest Ventures (CQV) created a tilt-rotor VTOL aircraft called the Vertex in order to study a number of concepts in VTOL design. This article discusses how CQV leveraged their Typhon UDX UAV design software to design this aircraft in an agile way with minimal time and resources.

The first major design challenge is to design the wings of the aircraft. VTOL aircraft require proper alignment of their aerodynamic center, center of thrust, and center of gravity to maintain hover and forward flight stability. This complicates their design by closely coupling the wing aerodynamics to the mass estimation, and to the propulsion system performance. Typhon UDX provides real-time prediction of aircraft mass, aerodynamics and thrust performance, which allowed the engineer to quickly test different wing geometries to converge into a design that provided maximum aerodynamic efficiency within the imposed stability constraints. This included evaluating dozens of different airfoil sections.

In addition, the tandem wing design requires careful tuning of the wing incidence angles to provide proper forward flight pitch trim and stability. Typhon UDX aerodynamic predictions were used to perform this optimization in a matter of minutes. These results were later confirmed through high-fidelity Computational Fluid Dynamics (CFD) analysis, which took a number of days to carry out.

The second major design challenge is the selection of the propulsion system. The performance of VTOL systems is often limited by the size of the battery pack (or fuel tank), which is in turn limited by the hover thrust available for vertical takeoff. It is very important to carefully select the motors, speed controllers and propellers to provide maximum takeoff thrust. At the same time, the propulsion system must be efficient for high-speed forward flight. Typhon UDX allowed the engineer to test in simulation different combinations of off-the-shelf motors, batteries and propellers to find the best combination for the Vertex. To extract maximum performance out of the propulsion system, each component was selected to operate close to their operational limits, with adequate safety factors.

The third major design challenge is the implementation of a custom flight stabilization and control algorithm capable of flying the aircraft autonomously through hover, transition and forward flight. The Vertex has four independently tilting motors for thrust vector control, plus two elevons, providing many degrees of freedom for control. Leveraging Typhon UDX simulations, the engineer created quick prototypes of the code using Python scripts to test different control approaches. After converging on a workable algorithm, it was translated into the final implementation within the PX4 flight control stack. In this process, Typhon UDX was interfaced with a Pixhawk flight controller and ground control station through Hardware-In-The-Loop simulation, allowing the engineer to test and debug the final software implementation through simulation, before going to the field.

Finally, a detailed design of the airframe was carried out in CAD software and constructed leveraging rapid prototyping methods such as 3D printing and CNC milling. The aircraft performed as expected based on the simulations, and required minimal tweaking. This project serves to demonstrate how integrated analysis and simulation software can create a more agile design and development process, especially for VTOL systems such as the Vertex.

Typhon UDX is now available for commercial and academic use.