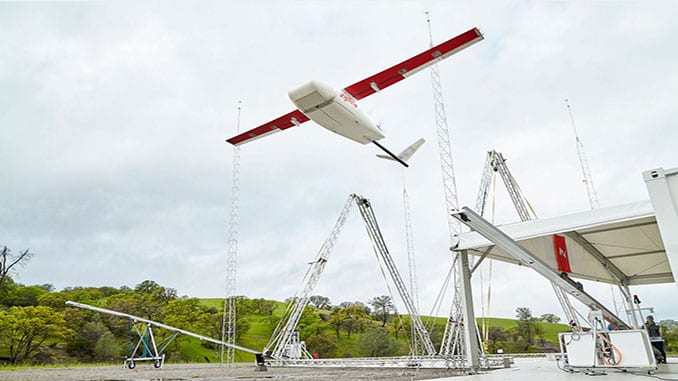 Zipline unveiled the fastest commercial delivery drone on earth. Zipline’s mission is to bring life-saving medicine to the most difficult to reach places on the planet. The Silicon Valley-based company operates the world’s first and only national scale drone delivery system, making thousands of deliveries per year. Zipline’s newest generation of autonomous aircraft flies farther, faster and with more cargo than was ever before possible— even in high altitude, heavy wind, or rain.

The new aircraft is part of a complete redesign of Zipline’s logistics system, which dramatically improves the system’s launch, autonomous flight, and landing capabilities. The improvements will decrease the amount of time between Zipline’s receipt of an order and launch of a fulfillment flight from 10 minutes to 1, increase the number of daily delivery flights that each Zipline distribution center can make from 50 to 500, and expand the radius of each distribution center to serve populations of up to 10 million people.

Zipline’s new delivery vehicle is an autonomous fixed-wing style airplane. The plane is capable of flying at a top speed of 128 km/h, and a cruising speed of 101 km/h—21 km/h faster than the previous generation of aircraft—with a round trip range of 160 kilometers carrying up to 1.75 kilos of cargo. The new plane is capable of flying four times faster than the average quadcopter drone and can serve an area 200 times as large.

“Our first generation aircraft and logistics system allowed us to create the first and only drone delivery service in the world, which is helping to save lives in Rwanda every day,” said Zipline CEO Keller Rinaudo. “We’ve taken everything Zipline has learned making thousands of life-critical deliveries and flying hundreds of thousands of kilometers and redesigned our entire system and operation from top to bottom. The new aircraft and distribution center system we’re unveiling today will help Zipline scale to meet the needs of countries around the world—including the United States.”

Progress In Rwanda To Date

In October of 2016, Zipline launched the world’s first national drone delivery operation in Rwanda. The company was contracted by the Government of Rwanda to establish one distribution center with 15 drones to deliver blood, plasma and platelets to twenty one hospitals across the western half of the country. Since launching the service in Rwanda, Zipline has flown 300,000 km, delivering 7,000 units of blood over 4,000 flights, approximately a third of which have been in emergency life-saving situations.

The company is now delivering more than 20% of Rwanda’s blood supply outside of the capital, Kigali. In addition to its impact on lifesaving emergency situations, Zipline’s just-in-time drone delivery has helped transform the country’s medical supply chain. To date, instant drone delivery has helped ensure that hospitals always have access to blood products, increasing the use of some blood products by 175% and reducing waste and spoilage by over 95%. Zipline is in the process of opening its second distribution center in Rwanda, which will help bring the entire country within range of its life-saving service.

Drone Delivery In The United States and Beyond

Zipline is working with state governments across the country to launch its medical drone delivery as a part of the Federal Aviation Administration’s (FAA) recently announced UAS Integration Pilot Program (UASIPP). The FAA created the UASIPP as an opportunity for state, local, and tribal governments to partner with the private sector to accelerate the development and deployment of safe commercial drone innovation in the country.

A key priority of the program is integrating autonomous, beyond visual line of sight flights over populated areas into the FAA’s National Airspace System. The FAA is expected to formally approve UASIPP projects in the coming weeks and enter into formal Memorandums of Agreement with applicants by May 7th, 2018. Zipline projects chosen as a part of this process are expected to commence operation by the close of 2018.

“Billions of people on earth lack access to critical medicine,” said Zipline CEO Keller Rinaudo. “In East Africa, Zipline’s drones bring people the medicine they need, when they need it in a way that reduces waste, cost and inventory while increasing access and saving lives. We’ve been hard at work to improve our technology and are ready to help save lives in America and around the world.”

In addition to plans to expand its service to the United States later this year, Zipline announced in August of 2017 plans to launch the world’s most extensive drone delivery service in Tanzania to provide emergency on-demand access to critical and life-saving medicines. Zipline and the government of Tanzania plan to use drone delivery for blood transfusion supplies, emergency vaccines, HIV medications, antimalarials, antibiotics, lab reagents, and basic surgical supplies.