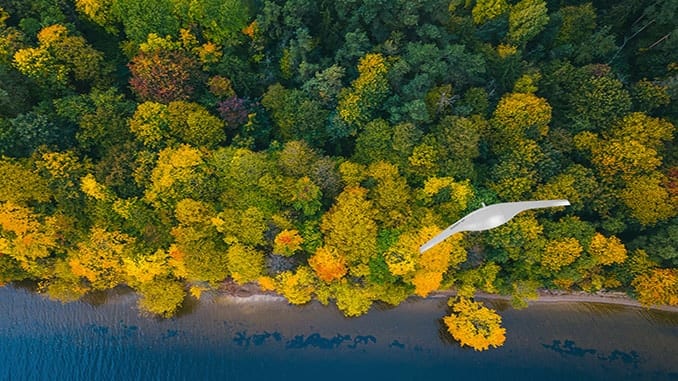 In the Borey-10 unmanned fixed-wing aircraft, UAVOS has implemented a number of design features that enhance reliability and simplicity of operations. Rechargeable LiIon cell-based batteries assembled in-house, a hermetic casing of the autopilot, the minimum number of units and components significantly reduces the probability of an accident and extends the operational life of the aircraft. Preparation for the flight, including the process of assembling the UAV, takes only 10 minutes.

Fixed wing Borey-10 range for the transfer of real-time video in difficult meteorological conditions during operation is at least 18 miles (30 km), and for control – at least 43 miles (70 km). A great advantage of the new unmanned aircraft is a high duration of a non-stop flight – 4 hours with a payload of 2lb (1 kg). A heated battery compartment allows drone to fly in temperature as low as -22F (-30C).

Borey-10 is equipped with a system of emergency wings drop, which works in emergency situations during the landing. The console, touching the surface of the earth, is unfastened from the center wing and absorbs the impact energy. The aircraft remains unharmed.

The UAV is equipped with an EW countermeasure system, which makes it possible to carry out research operations in the absence of GNSS signals.

The unmanned aircraft is made according to the “flying wing” scheme. Borey-10 is a compact unmanned aerial vehicle: with a wingspan of 140 inches (3.57 meters), and weight of 20lb (9 kg). A take-off is made from unequipped sites, and landing at any assigned point of the terrain, which does not require special training. Take-off is carried out with the help of a rubber rope or a catapult, landing with a parachute. The aircraft lands on its back, which reduces the likelihood of damaging the payload – since the payload is protected by the same aircraft.

Vadim Tarasov, UAVOS investor and Board member said, “Borey-10 is an unmanned aircraft, always ready for take-off! Due to its small size and modular design, Borey-10 is easily transported, assembled, and launched fast even under the most unfavorable conditions. In the process of developing the aircraft, special attention was paid to the simplicity of operation, which significantly reduces the cost of maintenance and preparation for the flight, and increases the economical utilization efficiency of the complex.”

Borey-10 is designed to perform mapping, surveillance and reconnaissance tasks, monitoring of oil and gas pipelines, military bases, and the state border. Borey-10 will become indispensable as an unmanned aircraft for rescue operations in liquidation of emergencies and search operations. The UAV is equipped with a photo camera, a front video camera, a thermal imager and a gyrostabilized television camera.

“Besides, for this aircraft, our programmers have developed special software that greatly facilitates the subsequent processing of data, and also makes it possible to automate the process of merging the necessary frames,” comments Vadim Tarasov, UAVOS investor and Board member.