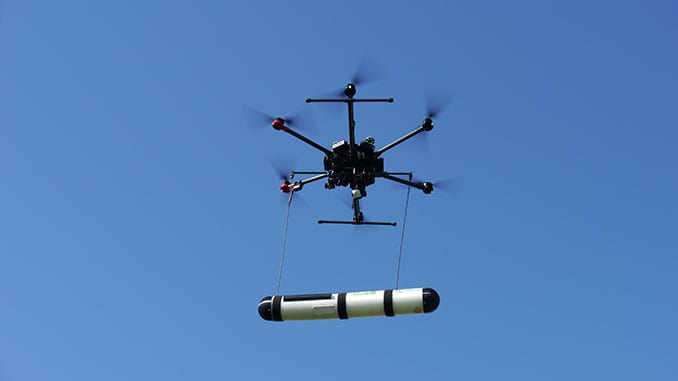 US Aerial Video Inc. (UAV), has announced it recently completed a 6-month proof of concept project in conjunction with the National Energy Technology Laboratory and the Pennsylvania Turnpike Commission in which a drone-mounted magnetometer was successfully deployed to identify unmarked and abandoned gas wells in South Western Pennsylvania. The area of operations was mostly rugged and wooded areas where a proposed highway is under development by the PA Turnpike Commission.

Ken Heirendt, Geo-Technical Engineering Manager of the PA Turnpike Commission stated, “Southwestern Pennsylvania is filled with abandoned wells, many of which are more than 100 years old and thousands of feet deep. These wells are very difficult to find during the design phase of construction and become very costly if a contractor discovers a hidden well during earthwork. The drone-mounted magnetometer system developed by US Aerial Video and the US Department of Energy’s National Energy Technology Laboratory significantly helped the PA Turnpike by locating these wells prior to construction on the Southern Beltway Project. The drone surveyed the ground surface and detected wells by sensing perturbation with the earth’s magnetic field caused by vertical steel well casing. That allowed us to map the wells prior to the contractor randomly discovering them – saving the project
money.”

During the project, more than 125-line miles of data was collected over 5 areas along the proposed highway right-of- way. During one section of the survey that consisted of a roughly half-square mile grid, 41 potential targets were located by the drone. During subsequent field reconnaissance, 5 of those targets were confirmed to be unmarked gas wells.

Luke Wylie, COO of US Aerial Video Inc. added, “During this project we were challenged by many facets of integrating these technologies. In addition to overcoming the hardware challenges, we had to develop complex flight procedures to successfully collect actionable magnetic data in the rugged areas in which we were operating, all while complying with FAA regulations governing drone use. We are pleased that we were able to identify dozens of abandoned wells during this project. We’re confident this airborne magnetometer technology is poised to be a game changer for many industries such as earthworks, mineral exploration, utilities, asset recovery and more.”

About US Aerial Video:
US Aerial Video Inc. (UAV) is a Pittsburgh based industrial drone services provider. Established at the forefront of the drone revolution UAV is an experienced company that operates at a standard established on thousands of hours experience in both manned and unmanned aircraft. UAV provides industry leading aeromagnetic surveying, aerial asset inspections and a wide range of specialized and custom drone operations with a focus on maintaining a perfect safety record.