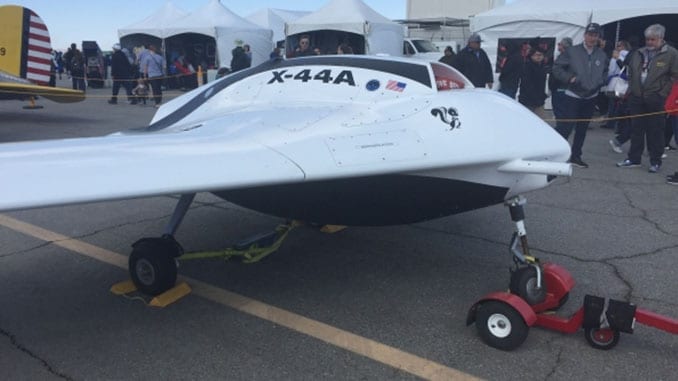 Lockheed transported the diminutive swept wing UAV to the air show at Gen. William J. Fox Airfield from its nearby Skunk Works facility at the U.S. Air Force’s Plant 42 in Palmdale. The company says the aircraft first flew in 2001 as part of a “family” of vehicles, but declines to offer further details.

Lockheed opted to take the wraps off the formerly classified demonstrator as part of a campaign to boost broader awareness of its long-running UAV experience as well as to help mark celebrations surrounding the 75th anniversary of the Skunk Works. The move comes as Lockheed Martin enters the closing stages of a key contest against Boeing and General Atomics for the U.S. Navy’s MQ-25A Stingray unmanned aerial refueling carrier-based aircraft requirement–a decision expected as early as August. The UAV’s unexpected public appearance follows the disclosure of the X-44A’s existence last month in TheWarZone.com, a defense-focused website.

The aircraft shares a clear lineage with a series of Lockheed flying wing designs ranging from the RQ-170 stealthy surveillance UAV to the Sea Ghost concept proposed for the Navy’s now-abandoned Unmanned Carrier-Launched Surveillance and Strike program.

Chronologically, the X-44A represents an evolutionary step in Lockheed’s UAV development from the high-altitude, high-aspect-ratio wing configured RQ-3 DarkStar of the 1990s to the swept wing P-175 Polecat and subsequent RQ-170 designs of the 2000s.

The timing of the UAV’s first flight in 2001 may also explain the confusing use of the X-44A designation. The X-44 was originally allocated to the Multi-Axis No-Tail Aircraft (Manta) project, a proposed tailless derivative of the F-22. But Air Force funding for this concept, which was designed to demonstrate the performance and low observable benefits of thrust-vectoring flight control in lieu of vertical tails, was withdrawn around 2000.

With a wingspan of about 30-ft., the X-44A is distinguished by a spheroidal fuselage and a deep wing with pronounced inverse camber, complex curvature and a low observable indented trailing edge. Primary flight control is provided by two sets of split elevons. The presence of a discreet Williams International logo near the aircraft’s triangular-shaped exhaust nozzle appears to confirm speculation that the X-44A is powered by a small cruise missile turbofan like the Williams-made F112. The same engine was also used to power other previous X-planes including Boeing’s tailless X-36 subscale demonstrator and the X-50 Dragonfly canard/rotorwing demonstrator.

The X-44A configuration appears to be highly modular, with a large belly fairing covering the payload section of the lower fuselage and detachable wings outboard of the center section. The engine inlet, reminiscent of the RQ-170, is located on the upper forward fuselage aft of the break of the nose section. The nozzle is supported by an extended lower panel which shields the heat and noise of the exhaust from below. Auxiliary inlet scoops, one mounted on the upper aft fuselage and others on the upper and lower port fuselage, provide cooling air for internal systems, avionics and sensors electronics.

The demonstrator, which has a fixed tricycle landing gear, also sports a pair of what appear to be chin-mounted electro-optical sensors. Offset to the right of the nose is a tubular mounting for what was most likely an air data boom providing information on angle of attack and sideslip, static and total pressures and temperatures.

Lockheed Martin is expected to reveal further details of the X-44A in the coming months.