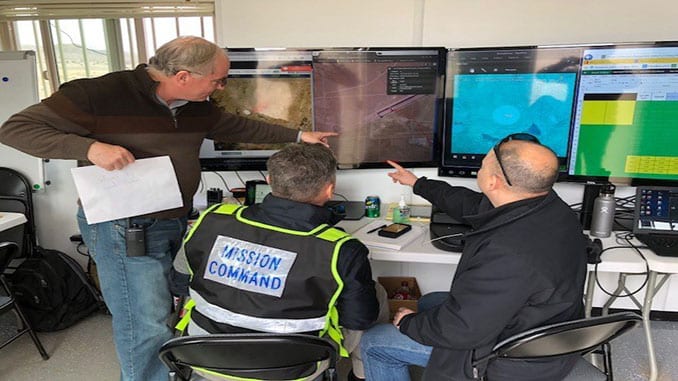 The Nevada Institute for Autonomous Systems (NIAS), who manages the Nevada UAS Test Sites, and its NASA Unmanned Traffic Management (UTM) partners flew multiple Unmanned Aerial Systems (UAS or drones) over a week-long testing period at the Nevada UAS Test Site at the Reno-Stead Airport. The testing focused on airspace management technologies that will enable the safe integration of UAS into the NAS.

On media day, a team from the Reno Fire Department simulated an incident with a victim experiencing severe blood loss and who needed an immediate transfusion. A multi-rotor UAS from Drone America was equipped with a container which held an actual packet of blood to be transported via drone in Nevada.

High winds and frigid temperatures tested both the drone and those on the ground, but the drone successfully landed in the designated landing area so that firefighters could retrieve the blood packet and begin the faux-transfusion.

The partners not only demonstrated drone flight capability, but also tested UAS traffic mapping, sensor and radar technology all of which were connected through a NASA UAS Service Supplier (USS) network to NASA Ames.

“This pioneering work with NASA and the FAA offers further proof that if it is happening in the UAS industry, it is happening here in Nevada,” said GOED Executive Director Paul Anderson. “With the entire state designated by the FAA as one of only seven UAS test sites in the United States, the role Nevada plays in advancing this life-changing and life-saving technology is truly unique and the experience and expertise located here is unmatched.”

“NASA, the FAA, and its partners including NIAS, are working diligently to extend many of the beneficial applications of small UAS beyond the current limitations in an environment that embraces innovation and industry growth while respecting aviation safety traditions,” said Arwa Aweiss, NASA’s UTM TCL3 Flight Test Director.

“We are proud that, since its inception, NIAS calls Rob Roy’s Innevation Center home, said Adam Kramer, Executive Vice President of Strategy at Switch. “Switch supports GOED, NIAS, and our other partner companies and agencies in our efforts to lead the nation in unmanned traffic management, advanced flight and delivery systems and public safety operations experimentation. Rob Roy built Switch’s world class technology infrastructure in anticipation of exactly the kind of innovations represented by advances in the UAV industry.”

“The State of Nevada will be known for its significant contribution in this journey through its pioneering work with the FAA, NASA and private partners like ourselves, facilitating safe and effective integration into National Airspace.” said Mike Richards, President and CEO of Drone America.

“We’re so happy to have been a part of this event with NASA, the FAA, and NIAS as it took us closer to a real UTM solution for safe integration of drones into the National Airspace System,” said Amit Ganjoo, CEO of ANRA Technologies. “This was the first real world attempt where multiple USS platforms were integrated to manage and de-conflict UAS operations simultaneously in the same region.  Achieving this is a significant accomplishment and we are excited to have played a central role in this exercise along with the other participants.”

“Citadel would like to thank NIAS for organizing the NASA UTM TCL3 event.  Over a week of action, Citadel was able to help test its system to ensure the safe integration of drones into the National Airspace System.  Civilian safety is something we take seriously at Citadel and it was our pleasure to showcase a technology that can fit into the overall technology stack that will be used to manage the national airspace,” said Daniel Magy, CEO of Citadel Threat Management.

“AiRXOS is proud to continue our participation in the TCL trials with NASA, the FAA, and NIAS to help demonstrate the future of dynamic airspace management in an interconnected UTM system.  The safe integration of Unmanned Aerial Systems (UAS) into the National Airspace System (NAS) is critical to the future of airspace management and the TCL3 flight trails are a critical step in realizing a truly scalable, integrated and safe drone ecosystem,” said, Scot Campbell, Staff Autonomy Scientist, AiRXOS.

About the UTM Project: The Unmanned Aircraft System (UAS) Traffic Management (UTM) project at NASA aims to enable access to low-altitude airspace for small unmanned aircraft systems in a safe, efficient, and fair manner. To achieve this, NASA is collaborating with the FAA, UAS Test Sites, and industry to develop and test a UTM system research prototype with capabilities that will eventually become part of an operational system. This project is managed at NASA’s Ames Research Center in Silicon Valley. Learn more at https://utm.arc.nasa.gov/index.shtml

About the Nevada Institute for Autonomous Systems (NIAS): The Nevada Institute for Autonomous Systems (NIAS) and FAA-designated Nevada Unmanned Aviation Test Site leads the growth of the Nevada Unmanned Aviation Systems (UAS) Industry through business teaming relationships, collaborating with primary research institutions on UAS research and development, and enhancing the Nevada UAS Industry knowledge base to attract new and permanent business and create jobs in the State of Nevada.   Learn more at www.nias-uas.com.

About Switch: Switch is a technology infrastructure ecosystem corporation whose core business is the design, construction and operation of the most advanced data centers, which are the foundations of the most powerful technology ecosystems on the planet. We believe that the future progress of humanity depends on the sustainable growth of the Internet. As more people, businesses, governments and devices come online, the need for data centers increases, as does the growing need to power those data centers with renewable energy.

About Drone America: Drone America strives to be one of the World’s Top Providers of Autonomous Unmanned Vehicles, high tech equipment and services. Our mission is to use UAS technologies as a means to survey, protect, and preserve human life and strategic resources around the Globe. For more information about Drone America please visit www.droneamerica.com/

About AiRXOS: AiRXOS, a GE venture, is helping accelerate the safe, efficient, scalable integration of air and ground space for autonomous and manned vehicles.

About Citadel: Citadel is a company based out of San Diego California.  It was founded in 2016 by experts from both the commercial and defense industries who saw the growing drone problem and wanted to build a ground up solution to address this problem.  Today Citadel’s technology has a half dozen government agencies that have invested in the technology and is currently deployed in multiple combat theaters.