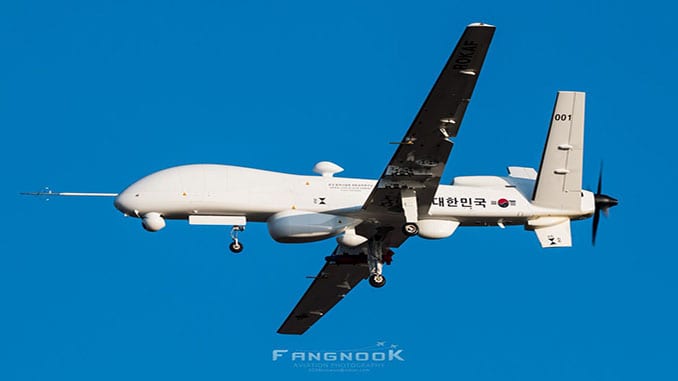 Images posted online on 17 March showed the UAV, serial number 001, performing unspecified trials, the details of which were not disclosed. Built by Korean Air Aerospace Division (KAL-ASD) on behalf of the Korean Agency for Defense Development (ADD), the KUS-FS made its maiden flight in 2012.

The indigenously developed KUS-FS is designed for armed land and sea Intelligence, Surveillance and Reconnaissance (ISR) missions with endurance of up to 24 hours.

It reportedly has a wider wingspan than the Reaper at 25 m and is powered by a 1200 hp Pratt & Whitney PT6 turboprop engine.

The prototype with marking 001 in South Korean Air Force (ROKAF) livery is also equipped with four underwing weapon stations, with one station holding a trial munition.

Onboard sensors include a chin mounted EO/IR turret, a 360-degree capable belly mounted maritime radar to detect targets at sea and Electronic Support Measures (under fuselage, behind wings) to identify and locate signals from maritime vessels.

Unlike in Reaper, the KUS-FS’s main landing gear retracts inward into wings, rather than into fuselage.