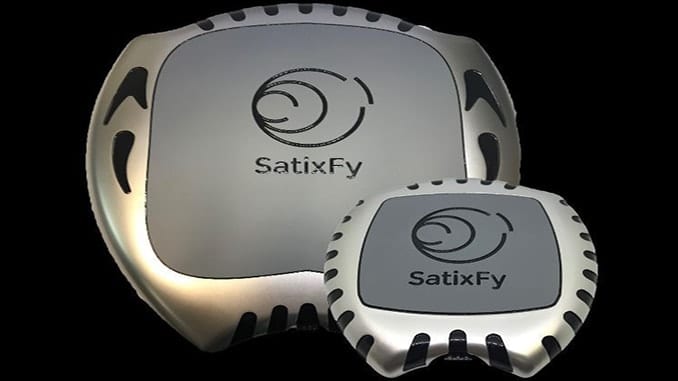 SatixFy UK, designers of next-generation satellite communication chips and systems, today introduced its full Electronic Steered Multi-Beam Array antennas (ESMA). The scalable architecture supports any antenna size up to 1 million elements (in Ku band 10m by 10m), any frequency through a dedicated RFIC, any polarization including circular and linear simultaneously, any shape including conformal arrays and up to 32 beams both in receive and transmit. The antenna, based on a fully digital beam forming technology, supports an instantaneous bandwidth of over 1 GHz and works in both TDD and FDD modes. Expected array efficiency is better than 70%. The antenna includes an ACU (Antenna Control Unit), self-calibration capabilities, and on-chip trigonometric calculator for fast tracking and beam steering.

The antenna supports any external modem through L-band interface but is best utilized when closely coupled with SatixFy’s current 500MHz baseband modem chips (Sx3000).  ESMA antennas use less power based on waveform duty cycle. If there is no traffic, no power will be needed from the antenna, such as in DVB S2X time slicing (Annex M). With its integrated modem, the antenna supports various operational modes such as TDD (half duplex) and FDD (full duplex) and very fast Acquisition and Tracking. The SatixFy baseband chip can also serve as an additional DVB S2X overlay. SatixFy’s next generation 1GHz baseband chips will enable the simultaneous use of 8 beams and 8 modems out of a single antenna, through a single modem chip and a single Ethernet port providing both data and control.

“This is truly a remarkable product,” said Yoel Gat, Chairman and CEO of SatixFy. “Until now, most phased array antenna solutions had limitations mainly in terms of power per element and price. SatixFy designs its own silicon chips on very advanced silicon processes. Our chips enable our unique digital beam forming design, capable of lower power per element. The cost structure is now based on silicon economics as all our algorithms and innovative antenna design are implemented in Silicon.”

SatixFy’s Ku band IoT terminals with 64 and 256 antenna elements will be showcased at Satellite 2018, in booth #649. SatixFy is in the process of developing an aero antenna through the recently announced joint venture cooperation with Singapore Technologies Engineering (STE). Other applications using SatixFy’s ESMA technology are multi-beam payload for solar drones and small satellites, self-installed fixed antenna, multi-beam DTH antenna, connected cars and mobile receive only antennas for Satellite TV in cars.

“Expect to see a lot of innovation coming from us in the next months and years,” continued Gat. “We will address multiple markets and offer great performance that seemed imaginary only a few months ago.”