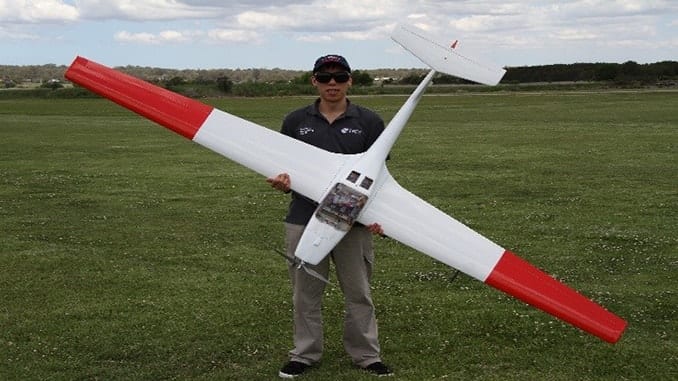 In a world first, a team of researchers from Sydney have successfully powered an unmanned aircraft flight with a triple hybrid propulsion system featuring one of the cleanest energies on Earth – hydrogen.

The recent tests follow on from four test flights using hydrogen fuel cells at the end of last year. The new results show that the supercapacitor improves the dynamic response of the overall propulsion system and also provides load smoothing for increased fuel-cell life.

The team’s overarching goal is to improve the flexibility and robustness of hydrogen fuel cell-based hybrid power systems in remotely piloted aircraft, also known as ‘unmanned aerial vehicles’ or drones.

“Hydrogen power provides much greater range and endurance compared to existing small electric unmanned aircraft. In the future, this may be useful for extended-duration inspection or surveillance tasks, such as surveying large agricultural properties or inspecting pipelines and other infrastructure,” Mr Gong said.

“Hydrogen fuel cells are also more environmentally friendly because they produce zero CO2 emissions and are much quieter than other fossil-fuelled aircraft.”

Despite these benefits, Mr Gong said aircraft manufacturers had traditionally been reluctant to implement hydrogen fuel cells because they are costly, limited in power and respond relatively slowly to load changes.

The team had overcome these issues by developing a solution using hybrid systems – where fuel cells are combined with batteries and supercapacitors – to improve peak power and load response for better performance during take-off and manoeuvres.

“Conceptually, this is similar to a hybrid car where the battery is an auxiliary power source,” Mr Gong said.

“The hybrid system enables greater flexibility and performance for drones compared to fuel cell-only propulsion, including faster take-offs, better ability to climb and maneuver away from obstacles, and increased fuel cell life.”

“Northrop Grumman remains committed to academic institutions, and the progression of research and development. The investments we make today can be seen in Australia’s future capability for decades to come,” said Ian Irving, Chief Executive, Northrop Grumman Australia.

“We take great pride in the investments we’re making to advance science and technology in the advancement of Australian workforce.”

This research was supported by DST Group through its Strategic Research Initiative on Advanced Materials and Sensing.

DEEP AERO Is Building AI-Driven Drone Technology On The Blockchain